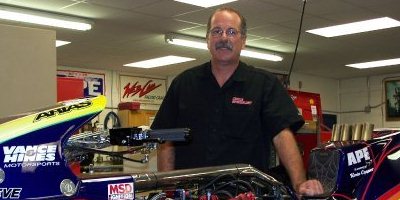 Top Fuel legend Larry “Spiderman” McBride can’t wait to race again, even though the ten-time champion knows winning will not be easy.

McBride has been busy overhauling his world record-holding motorcycle and servicing what he calls a “trailer full of motors,” in anticipation of what Spiderman expects to be a highly-competitive race, The Manufacturers Cup from Valdosta, Ga., Nov. 11-13.

Despite McBride’s nemesis, and winner of the Spring Manufacturers Cup, Korry Hogan declaring retirement due to an unfortunate top-end crash in testing, McBride believes a full field in the nitro category is likely.  Veteran Chris Hand will enter his import and several accomplished Top Fuel Harley riders are expected to participate, including Tommy Grimes, Takeshi Shigematsu and Joey Sternotti.

At last year’s race, Grimes and Shigematsu produced the sport’s quickest side-by-side Harley pass with Shigematsu running 6.13 to Grimes’ 6.16 in qualifying.  The competition was so demanding at last November’s event, McBride qualified fifth.

“I’m really excited so many Nitro Harley’s are coming.  These motorcycles seem to get quicker each year and the fans really enjoy them.  I know they give me plenty of close races,” said McBride, who defeated Ray Price’s Harley-Davidson, ridden by Tommy Grimes in the final of last year’s Cup.

McBride’s goal is to again reach winner’s circle, but McBride admits, establishing a new world record would be the ultimate achievement.  The Spiderman officially holds the coveted elapsed-time mark at 5.79 but unofficially, has been as quick as 5.74.   Both jaw-dropping runs came at Valdosta’s South Georgia Motorsports Park in 2008.

“I would love to go even quicker and Valdosta in November is the place to do it,” McBride said.  “If the weather conditions are on, we can go really fast.  We will be hoping for 70 degrees, less than 1,000 feet of corrected altitude and about 60 grains of water vapor in the air. If conditions are right, and we hit the tune-up, I know this motorcycle can run 5.60s.”

This will be McBride’s first opportunity to make runs, since performing in front over 55,000 fans at Norwalk’s Night of Fire in August.

“I’m really looking forward to getting on the bike again.  It’s been too long,” McBride said.  “Valdosta is always a great race and a great reunion of friends. I’ll see you there.”