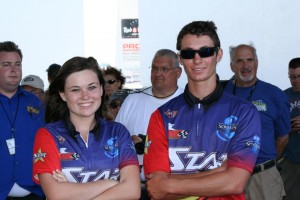 According to a decision handed down today (Thursday) by Graham Light of NHRA’s Competition Department, the Sovereign-Star Racing team will not be permitted to enter 19-year-old developmental driver Chaz Kennedy as the replacement racer following Scotty Pollacheck’s resignation from the team on Tuesday.

Sovereign-Star Racing received the unexpected news on Tuesday morning that Pollacheck, who is No. 6 in the points standings, would be resigning for the remaining four races of the NHRA Mello Yello Series Countdown to the Championship, beginning with this weekend’s AAA Insurance NHRA Midwest Nationals in St. Louis, Mo. Following the news that one of their championship contenders would be leaving the team taking his points with him, the team quickly scrambled to find a replacement driver for their two-motorcycle team.

Later that day, NHRA’s Competition Department initially allowed Sovereign-Star Racing to register Kennedy for this weekend’s event, even though the deadline for registration had passed as of Monday at 1 p.m. (PST) prior to the original phone call from Pollacheck. This decision by NHRA was based on the assumption that Kennedy would be replacing Pollacheck’s entry.

Upon further review of the situation, NHRA returned on Thursday to inform the team that Kennedy would not be permitted to register because he was not replacing Pollacheck’s entry but was an additional entry after the Monday 1 p.m. deadline.

“I had no idea that NHRA wouldn’t let us fill in the blank that was left on Tuesday morning. It never crossed my mind. It doesn’t allow us to do our job. I’m very surprised first of all about the news and decision from Scotty and second of all that NHRA wouldn’t allow us to remedy the situation to meet our obligations to our team, our sponsors and our fans. This new development from NHRA adds to the unfortunate situation that Scotty left us in,” Star Racing owner George Bryce said.

Tom Cladwell Ready for Bowling Green and The Rock