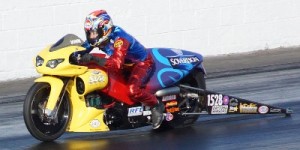 Sovereign-Star Racing’s John Hall began the season with his first ever NHRA (National Hot Rod Association) appearance at the Gatornationals and later advanced to two semifinal round appearances and a celebrated Round 2 win against Championship Runner-Up Andrew Hines and his Screamin’ Eagle/Vance & Hines Harley-Davidson, while also setting multiple career and team best records along the way.

Hall, who is not only a rookie in the NHRA Full Throttle Series but also a newcomer to wheelie bar racing in general, qualified his S&S Cycle powered XB12R Buell at 13 of the 16 Pro Stock Motorcycle national events this season, earning his best No. 6 qualifying position at the Summit Racing Equipment NHRA Nationals in Norwalk, Ohio.

“This season was a great experience but it went by a lot quicker than I thought it would. I also think I had more fun than should be allowed! The best things that we’re taking out of this season are the friendships that we made over the year. The other teams accepted us as racers and respected us throughout the season.

“Sure, beating a Harley was a highlight for us – a lot of people ask me about that. But, basically, being able to beat anyone out there is an accomplishment. There were 16 great competitors out there at every race, and being able to go to two semifinals against them was pretty cool,” Hall said.

As he fought a close points battle that nearly got him into the top 10 Countdown to the Championship, Hall also steadily improved his career best Elapsed Time (ET) at three different races throughout the season. Hall posted his current career best ET and speed with his 6.864/194 mph pass at the Auto Plus NHRA Nationals in Reading, Penn. This record was also the Star Racing team best ET until it was later surpassed by teammate Scotty Pollacheck’s 6.859 ET at the NHRA Finals in Pomona, Calif.

“I’ve gained a lot of confidence since we started out in Gainesville, and that has helped me to steadily progress throughout the season. Going into it, I was unproven to myself and to everyone else. Some races were more challenging than others and sometimes I felt like I was going backwards instead of forward, but overall this season I feel like I’ve progressed as a racer and competitor,” Hall said.

“John and Scotty both produced a lot of firsts for our team this year,” Star Racing owner George Bryce said. “When we started out the season, it was a huge surprise to me, that we could be that far behind after missing 45 NHRA national events. The other teams have definitely improved their performance over the last three or four years.

“We made small improvements incrementally over the first half of the season, but once we got our DTS engine dyno back online in August of this year, we really accelerated our learning curve. Gaining and moving toward the front of the pack was very rewarding, and it was all made possible by our good friend and partner, Jeno, who helped to bring the Star Racing team back to Pro Stock Motorcycle where we belong!

“We’re also very grateful to the wives of our team members, Ivette, Susan and Peggy, and the other family members who supported them and allowed our guys to put 16 weeks of their lives into our team effort at the track,” Bryce said.

In addition to multiple team improvements in ETs and Pollacheck’s No. 7 finish, Sovereign-Star Racing also had both rookie drivers nominated as finalists in the 2012 Automobile Club of Southern California Road to the Future Award, which recognizes the top rookie competitor in the NHRA Full Throttle Drag Racing Series. At the Southern Nationals in Atlanta, Ga., the team also claimed the 2012 Best Appearing Crew award, which is given to only one out the approximately 400 entries at each race and is meant to commend teams for their overall presentation and the unity of their team brand.

With his team’s racing success overseas, Rujp decided to use his resources to fulfill his “big dream” of racing in the U.S. NHRA Pro Stock Motorcycle circuit, but with one stipulation – Bryce had to be the one to manage his team and tune his bikes.

“Jeno and I have a great mutual respect for each other. We may not speak the same language, but we both speak racing!” Bryce said. “I was honored that he wanted me to take his team to the next level by racing NHRA. That’s a lot of trust for someone to put in you and your abilities, so I didn’t take that responsibility lightly.”

Rujp, who attended about half of the 16 races this season, was definitely impressed by the challenging competition within the class and commended his team for the great strides of improvement they made throughout their rookie year.

After the end of the season, the Sovereign-Star Racing team members are increasingly nostalgic and grateful for the unique opportunities and close relationships developed over the past year.

“I want to thank George, Jackie (Bryce), Jeno and the whole team for being crazy enough to take a true rookie like me to Gainesville and sign him up for a whole season. I’m thankful that they had confidence in me and had the patience to work with me and nurture me through my first season.

“I don’t think a lot of other people would have taken the time to do that. Most people don’t offer any help with the mental aspects of it or the technical skills that you need, they just expect you to go out there and do well. Thanks to the crew and everyone at the shop for taking a chance on me, and hopefully I’ve made them proud. I also have to thank Scotty for being a great teammate and my family for letting me go out and live a dream of mine,” Hall said.