SEMDRA Deactivates for the 2012 Race Season 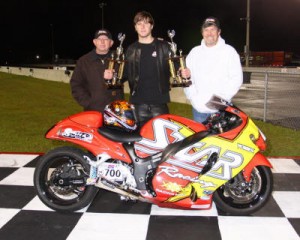 The Southeastern Motorcycle Drag Racing Association (SEMDRA) committee members regret to announce that the organization will not be active for the 2012 drag racing season in the hopes that conditions improve enough over the next year to reactivate the series for 2013.

The committee made the decision to forgo the 2012 season due to the nature of the economy. After its 13 years in operation, SEMDRA will remain an active Limited Liability Corporation (LLC) during this unexpected hiatus to ensure that reactivation is as simple as possible when the time comes.

The SEMDRA committee welcomes all suggestions and comments from racers, fans and sponsors for the future improvement of the series. SEMDRA also encourages all racers to continue the competitive spirit by supporting other series during this hiatus to be better prepared when the series reactivates.

During its 13 years, the SEMDRA series has participated at five different tracks with thousands of racers competing for purses, year-end bonus money and championships. SEMDRA’s primary focus has always been to provide a fair and safe racing environment, giving top priority to guaranteed purses.

The SEMDRA committee would like to express their sincere gratitude to all of the great racers, fans, sponsors, associate sponsors and racing facilities for their continued support and loyalty over the years.