And when a businessman like Baverstock sees an opportunity to partner up with another and advance their companies’ fortunes, they twist the throttle on the relationship. That happened a couple years ago with Baverstock and two-time NHRA Top Fuel Harley champion Tii Tharpe, who moonlights as president of Spevco. 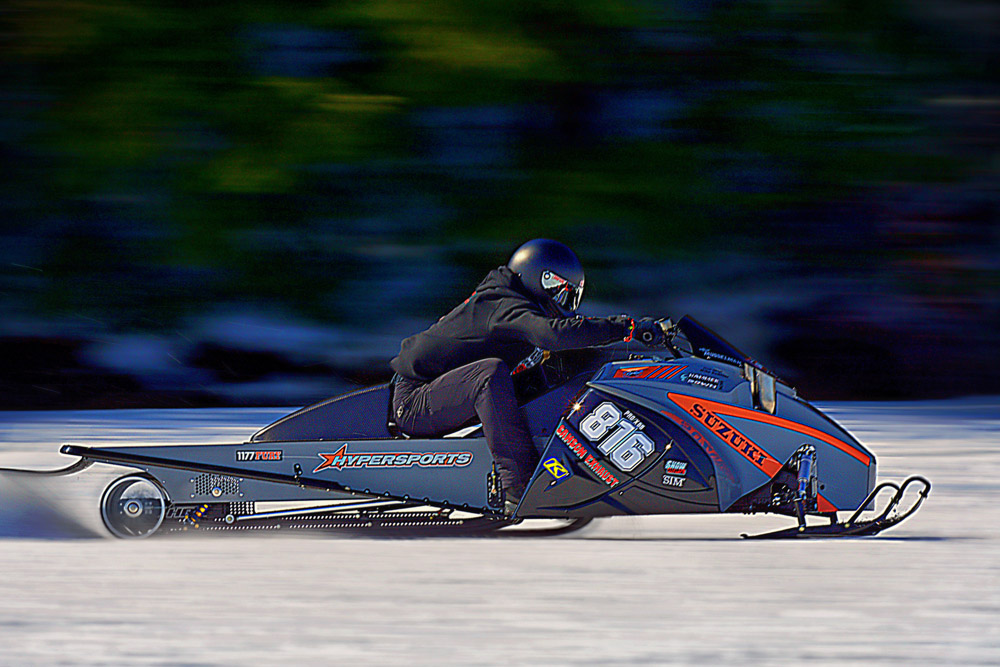 “Dustin and I had a lot of synergy right out of the gate,” said Baverstock. “I think he’s just as excited about our partnership as I am.”

“I’m just super impressed with Mike,” said Pancheri. “The guy’s super passionate and he’s an all-in kind of guy. We love to align with those types of people, because those are the guys that are go-getters. They just get it done. But he’s also really personable, and I can tell that he’s very serious about growing the industry and his sport.”

Hammer Down Racing is led by Musselman, the son-in-law of Top Fuel Harley builder/tuner Jack Romine, and relies heavily on the head mechanic and building skills of Romine, the tuning skills of Mike Komisar, and the skills of Craig Campton, Glen Hall and the staff at Hypersports. 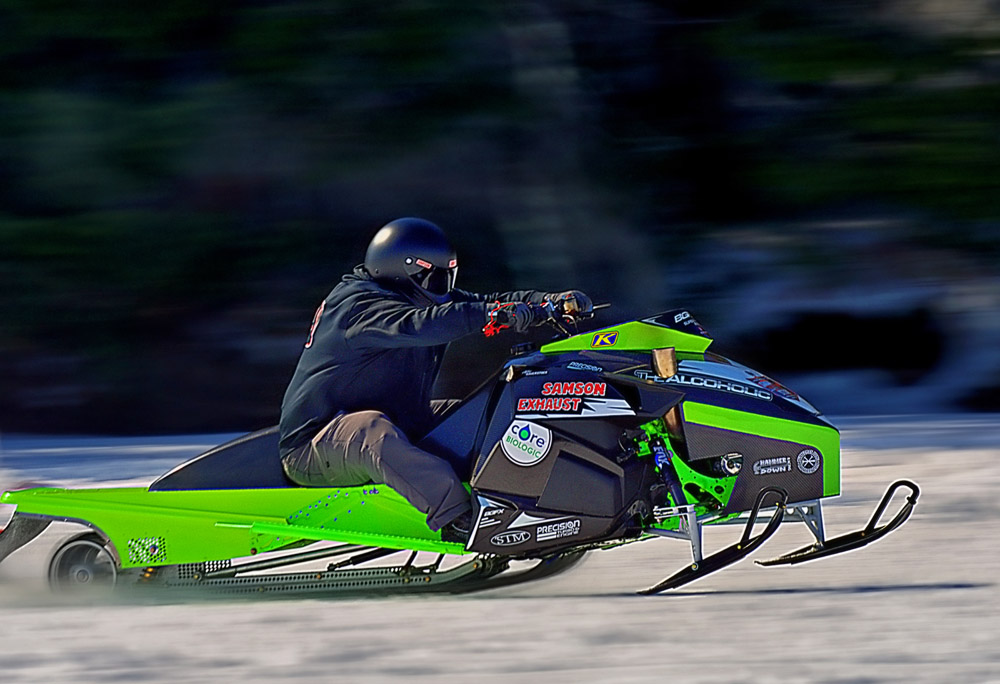 The series and the sport is accelerating as quickly as Baverstock’s sled, opening up opportunities for growth for companies like Klím. “In the snowbelt—the northern US and Canada—for us, it’s the big way to adapt to the wintertime,” said Pancheri. “I know people that pick up snowmobiling just because they don’t have anything else to do in the winter. And then pretty soon, they’re addicted to it, and it’s now their main passion. And they just really want to get through the summer as fast as they can so they can get back to snowmobiling! Their priorities have completely flip-flopped!”

Hay Days is the Sturgis of snowmobiling, a huge event in Minnesota that celebrates fall and the coming winter. “It’s like a State Fair on steroids, but if everything at the Fair were snowmobiles,” said Pancheri. “They have the world championship snowmobile grass drags there, so all the fast guys in the world show up.

And Baverstock wants to be there to support his teammate and their new sponsor, a company of people that ride and use the solutions they manufacture and sell. “Our tagline is technical riding gear,” continued Pancheri. “Because we’re a company full of riders, we’re always just looking for solutions to things. So we’re really a company that’s out there trying to find things to make the riding experience better—make the rider more comfortable, make the rider more protected and help them perform better.

“So we’re a powersports company looking for apparel solutions and making the apparel experience better. That covers snowmobiles, motorcycles, dirtbikes, quads, you name it. Anything where there’s an opportunity to have the apparel enhance the rider’s ability to enjoy the experience.

“We’re pretty passionate about it. I also drag race, just on a regional level here locally in the West. I have a grass drag sled.

“So anytime we get the opportunity to be involved with projects like Mike’s, you don’t really have to twist our arm too hard. It’s pretty fun stuff.

“And the cool thing is, the power to weight ratio on snowmobiles is insane. You look at what they’re doing with some of these bikes, and you put that in a snowmobile package, and they’re fast!”

And the motorcycle drag racing world has noticed and wants a piece. Champion motorcycle drag racer Jeremy Teasley went up to Wisconsin and barely lost his first snowmobile race by only inches on Chris Connelly’s sled. Four time NHRA Pro Stock Motorcycle champion Matt Smith and his racer wife Angie went north from their North Carolina home to snowmobile last winter and had a blast, posting many videos of their experience for their fans.

And Klím can suit them up on the snow, the road, or the dirt. “We keep finding niches and places where we feel like we have something to contribute,” continued Pancheri. “As long as we can do that, we’ll just continue to adapt and roll with the changing needs of the industry.”

And promoting those contributions with partnerships like the one with Baverstock, Samson, Musselman, and Hammer Down is part of the job. “I’m really impressed with Mike, and I’m confident he’s going to be successful in this sport. No matter what he touches, it is going to work well because he’s just a great guy and he seems laser focused. So we’re excited to be working with him for sure.”

“I love to see success and successful companies like Klím,” said Baverstock. “I’ll definitely be doing everything I can do to see that they continue to be successful, and I really appreciate the faith they’ve shown in me as a racer and marketing partner.”

The first race this season for the team is at Great Lakes Dragway on August 21-22 with Musselman in the seat of his Hypersports HRC2 sled. Baverstock will wait for the snow in January at Mancelona Pro Stock Raceway.

XDA Rages on to Virginia for the 2021 Bike Bash