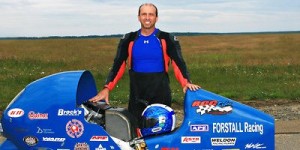 Until recently, going faster than 300 miles per hour on two wheels required stuffing oneself feet-first into a torpedo-shaped, outrigger-equipped streamliner motorcycle.

But on Sunday, Bill Warner, a Florida fish farmer, logged a record-breaking run of 311.94 m.p.h., whistling down the empty 2.5-mile runway at the decommissioned Loring Air Force Base in Limestone, Me. His mount, a much-modified Suzuki GSX1300 Hayabusa, was the first nonstreamliner motorcycle to break 300 m.p.h., according to the East Coast Timing Association.

Mr. Warner said that accelerating to his record-breaking speed was routine.

“It was very smooth. The bike was handling very, very well,” he said in a telephone interview Thursday. “I was in sixth gear, and my shift light flickered at 12,000 r.p.m. before I’d gotten to the end of the speed traps. So I knew I was going fast. I’ve been working on this speed for the last two or three years, and with this big fairing on the bike, the air is really going right around me.”

But if gathering speed felt perfunctory, slowing down was anything but.

“The fun of it was trying to stop that thing,” he said. “It skips and bounces and slides. There’s so much weight transfer to the front that it takes most of the mile-long braking area to get it back down to a comfortable speed.”

Despite Mr. Warner’s high terminal velocity, his budget was very low. While the motorcycle started out as a stock Suzuki, nearly every part was reconfigured by Mr. Warner or replaced with a donated hot-rod alternative.

The motor, which originally generated about 160 horsepower, was turbocharged, fueled with methanol and refined to handle as much as 1,000 horsepower.

“It’s got a ginormous turbo on it,” Mr. Warner said. “People don’t even put that size on big trucks.” The aluminum frame, meanwhile, was raked, stretched and fitted with lightweight, high-strength carbon-fiber wheels. To save money, he built the crucial aerodynamic fairing by hand.

“The day before, I went to the end of the runway in my truck,” he said. “There’s a grassy hill. I ran the truck back and forth a couple times to make a path to follow through the grass.”

“I was trying to be a good boy scout, he said. “I wanted to be prepared.”