Russ Collins of RC Engineering started his motorcycle drag racing career in the 1950’s. Over the years, he had engineered and constructed several wild rides for action at the tracks across America, when he created this wild monster. Collins built the revolutionary, triple engine, Honda powered drag bike he named  the Atchison, Topeka & Santa Fe in 1973.

The huge triple engine Honda Top Fueler was featured in numerous motorcycle and drag racing magazines, back in the 70’s it was probably the most famous drag bike of the decade. The Atchison, Topeka & Santa Fe set numerous records and Collins rode it to the first ever seven second quarter-mile turned on a motorcycle in Ontario, California, in 1973. Best numbers were in the 7.80 range with  speeds around 179. This bike was so powerful and heavy that it proved to be very hard to control. In 1976 the Atchison, Topeka & Santa Fe was destroyed in a horrible accident in Akron, Ohio. After a long time on the mend from crashing the triple Honda, Collins went motorcycle drag racing again, then later in his racing career, switched over to racing a Top Fuel Dragster. 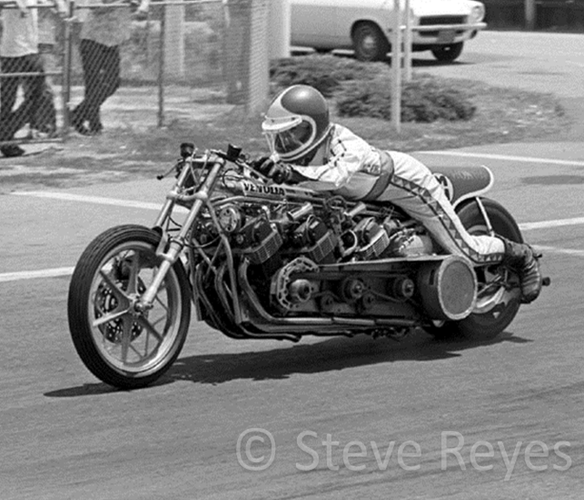