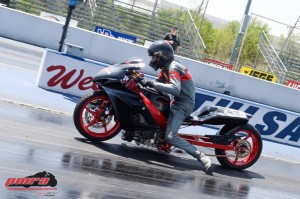 PMRA, presented by Fast By Gast held the 2014 season opener on Saturday, April 26th. It was a great event for all of our participants. We also kicked off the new Nitro Harley Pro Dragster class, thanks to the great folks at Pingel Enterprise coming onboard as class sponsor. The day was cloudy and the winds were a direct cross wind sustained at 24 mph which led the race committee to move the Pro Open, Nitro Pro Dragster, Top Gas and Super Comp classes down to 1/8 mile competition for safety purposes. 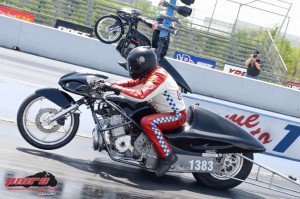 Top Gas, sponsored by Fast By Gast, saw Michael Ruch grabbed the #1 qualifying position with a stout 5.205 run on the adjusted 1/8 mile 5.20 index. The finals came five rounds later where we saw Mark Brady from Canyon Lake, TX take the win with a .052 RT and 5.214 at 138.07 when Kevin Oglesby from Lockwood, MO was unable to make it down the track due to a carb issue.

In the Hughes Racing sponsored Super Comp class, defending class champion John Fitzpatrick from Park City, KS was the #1 qualifier running a 5.612 on the adjusted 1/8 mile 5.60 index. John kept the momentum going as he met up with Dwayne Gaines from Oklahoma City, OK in the final round. Gaines took the hole shot win with an outstanding .002 RT running a 5.671 at 113.57 mph to Fitzpatrick’s .045 RT and 5.638 at 117.95 mph. 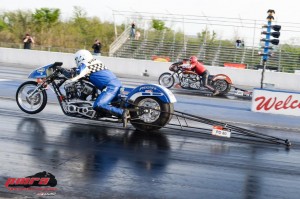 Street ET, sponsored by Schnitz Racing had a great mix of veteran racers along with new people coming out to race with PMRA for the first time. The lanes were filled with a mix of Suzuki, Kawasaki and Honda motorcycles. In the final round Eric Loebeck from Broken Arrow, OK met up with Ray Tonto Johnson, Jr. from Bethany, OK. Loebeck took the win with a .122 RT running a 9.953 on a 9.89 dial against Johnson’s .324 RT running a 9.517 on a 9.56 dial.

A big thank you to Tulsa Raceway Park, our sponsors, racers, families and friends. We look forward to seeing the Top Gas, Super Comp, Super Street, Super Gas, Pro ET and Street ET racers at the next race at Thunder Valley Raceway Park on Saturday, May 17. 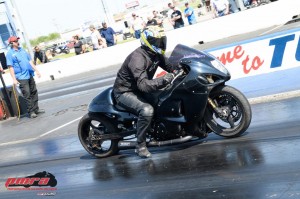