No Joke Racing Takes Two at The Rock 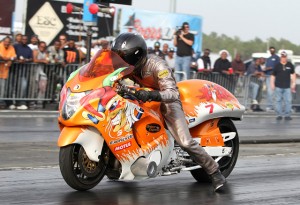 While his hometown of Sebring, Florida, basked in the annual glory of its 12 hour sports car race, Ken Edwards took his No Joke motorcycle drag racing team up to Rockingham, North Carolina to claim it’s own slice of success. The team returned triumphantly home from the Honda-Suzuki of Sanford Spring Bike Open and the opening round of the 2012 Mickey Thompson Performance Tires MIRock Superbike Series with two wins.

Edwards has had great success at Rockingham Dragway, including the Orient Express Pro Street win at last year’s season finale in November. But he’s a big man in a jockey sport, so Edwards put 21 year-old Ohio native Jeremy Teasley in the seat of his 600+ horsepower, street legal, turbocharged Suzuki Hayabusa. Almost immediately, the combination began testing in the rarified 6 second zone—officially achieved by only two street legal bikes. But the bike was destroying tires while it did so, and Edwards took the radical step of changing from the class standard 190 tire to an 18 inch tall, 8.5 inch wide wheel shod with a 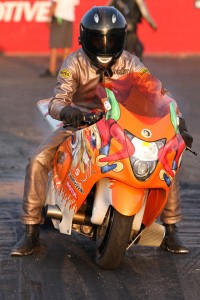 In Friday testing, the big tire struggled to find grip at The Rock. By the end of the night, Edwards decided he was switching back to the 190. But the No Joke Hayabusa wasn’t doing much better with the standard tire. With heavy spring pollen coating everything in sight, the high-powered Pro Street bikes spun often and Teasley qualified well down in sixth.

Two time defending DME Real Street champ Teasley was not having one of his customary easy weekends—not by a longshot—and posted a very rare redlight in round 1 of his title defense in that class. But as the Pro Street bikes struggled and riders jumped in and out of the throttle, Teasley’s seat of the pants feel and feather touch had him and the No Joke bike going rounds and eventually matching up with Ryan Schnitz and the 6 second HTP Performance Hayabusa in the final. As both bikes spun off the line, Teasley grabbed the track and powered to the finishline for the win while Schnitz spun again and sat up on the bike.

“We will be getting back to the Roaring Toyz 240 swingarm kit and the Continental Attack tire by the next race,” said Edwards. “We need to make a few adjustments to the swingarm pivot to make our setup work better. Reinventing the wheel is a big deal in drag racing, but we learned a lot at The Rock about our setup. So keep posted on upcoming testing at the Manufacturers Cup race. We will run the Michelin 190 tire if needed to win the event, but never doubt the patch the Continental puts down on the track. Its future looks very bright.” 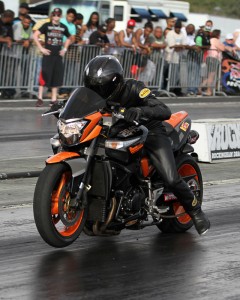 Pro Street wasn’t the only win for Teasley and bike owner/tuner Edwards, as Jeremy also won FBR Shop 5.60 on Kenny’s Suzuki B-King. It’s a hallmark of Teasley’s skill that he’s able to move seamlessly between vastly different kinds of equipment in classes with very different demands. Teasley and the B-King streetbike beat Jason Herron and his GS dragbike on a holeshot for his second straight win in the eighth mile index class, including last November.”

“It’s nice to have won the last three events with the No Joke Pro Street bike and the last two 5.60 races with the B-King,” said Edwards. “It’s been a long hard expensive road to travel but its finally paying off.

“I want to thank all my sponsors—Roaring Toyz, Exoticycle, Motul Oil, Carrillo Rods, and Brock’s Performance BST wheels and Öhlins shocks, along with Andrew Pierce and Bill Warner for all their  support. I would also like to thank my wife Julie and my beautiful girls Savanna and Barbrann for always being there with unselfish love for me and the sport. And Jeremy Teasley for the phenomenal riding skills he has. He is a very humble young man with a bright future ahead of him.”

And Teasley thanked Edwards. “He worked ALL weekend long on the bike. And thanks to Wayne Robertson for putting the 5.60 bike back together. Also my dad (James “Crow” Teasley) for driving all the way. And my brother Brandon finally broke out of retirement and won a race (House of Speed Crazy 8s)”

This team report prepared by Tim Hailey. Enjoy everything there is to read, see and watch about motorcycle drag racing and more at http://www.eatmyink.com