NHDRO Brings the Thrill to the ‘Ville

The Midwest’s largest motorcycle drag racing series—NHDRO—is making its first trip to Louisville’s legendary Ohio Valley Dragway one for the ages. Added to July 10-12’s Mid-Season Sizzle is what promises to be the world’s biggest motorcycle grudge race ever—the NHDRO Port-Tech Grudge Reunion. All of the nation’s top grudge bikes and trash talkers have been invited to the ‘Ville for a full weekend of long-tailed, high-wheelieing, high-speed action. 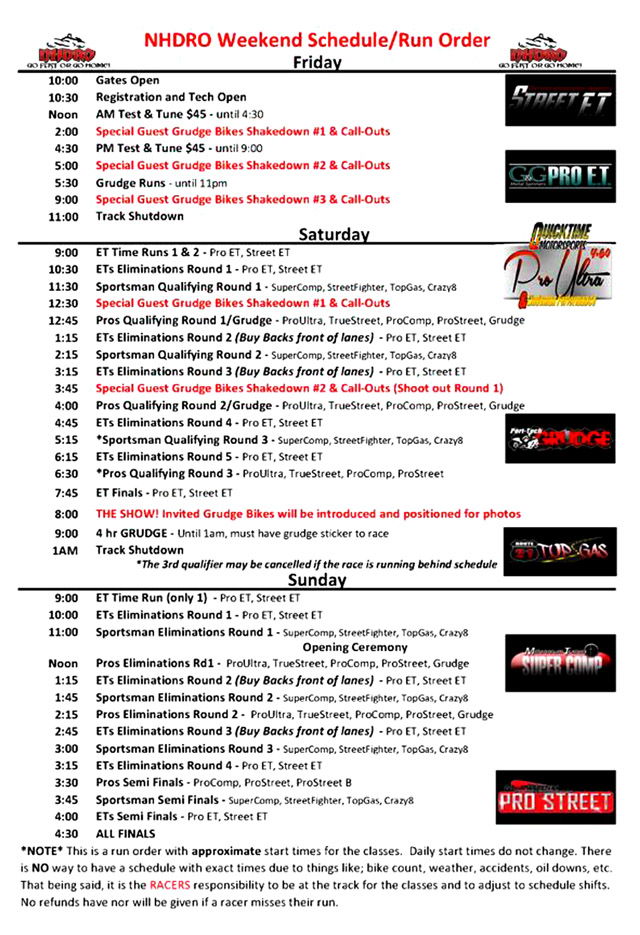 Locked-in grudge races include photographer’s favorite Eddie Cane vs Cobra Commander and Metal Mulisha (not at the same time, of course), Angola vs Bonecrusher, and Bud Light Lime vs Plain Jane. Any and all grudge bikes can still jump into this ring, with match-ups running on Friday, Saturday (‘til 1:00am) and Sunday. In addition to called-out pairings, there is a Quick 8 grudge class with a $1000 buy-in. All grudge racers are welcome to call-out any bike on the NHDRO’s invited list, and if you have the cojones to do so and follow through you will be added to the invite list for the NHDRO August race in Indianapolis.

“Eddie Cane” is the hardest working bike in the grudge business, and rider Ray Lee seems most comfortable when tuner Brian Hayes dials in Cane’s front wheel high in the air for extended stretches of race track. “Our bike is the people’s choice,” said Lee. “The wheelies make people want to see what the bike will do.” Those same wheelies make “Eddie Cane” the most called out bike around. “The world is an ash tray(!) to ‘Eddie Cane’ and it is a blessing for me to operate such a machine.”

Richmond, Virginia’s HTP Performance will stamp a huge footprint on the Grudge Reunion, and their Buck Burroughs-owned, Jeremy Teasley-ridden “Kingpin” is the hottest Grudge bike in the country. But “Kingpin” suffered a loss to “In 2 Deep” and will likely rerun the close Memphis race they won against a quick-wheelieing “Knight Rider”

Randy Cagle’s HTP-built and tuned “Cocaine” (10 wins, 3 losses) also wants a piece of Eddie Cane. “Brian (Welch, NHDRO boss) and I are similar as we are both innovative thinkers,” says Cagle. “Brian has gone above and beyond for the racer and that is hard to do now a days. He called me with an offer that I thought was really cool and he thinks about the grudge racers.”

The Johnny Locklear-built “Katrina” will not have usual rider Richard Gadson, who’s scheduled to ride “Lawd Have Mercy.” How will that affect Katrina’s performance?

Gadson will not only be riding the carbureted, wet nitrous “Lawd Have Mercy,” but will be tuning along with Coop of Cooper Performance. With a win in the bike’s only race so far (over Jeremy Teasley at last September’s NHDRO event) Gadson also wants a piece of Eddie Cane. “I like NHDRO because of the atmosphere,” says Gadson. “Brian tries to give equal share and priority to grudge and I like how Brian runs his program.”

Georgia’s Lance Hines will be riding the Shawn Gann-built, Jay Regan-tuned nitrous Outlaw bike “Becky” (4-2). “When it performs, no one can stage beside this bike,” boasts Hines, who has called out “Kingpin.”

Legendary MSP tuner Joe Marasco continues to believe in the supercharged “Fugitive” (formerly known as the “Loch Ness Monster”) Suzuki Hayabusa despite the bike’s 0-5 record. To make matters worse, lightweight jockey Chuito will be replaced by strapping rider Derrick “Squeak” Edwards in Louisville. “We will race ANYONE within weight—200 pounds,” says Squeak.

“Huge ‘Thank you’ to NHDRO for allowing us grudge racers a venue to race at and get a return on all our hard work,” says Marasco.

As intense as the Grudge Reunion is, it’s only part of the show. The whole NHDRO slate of classes will also continue their season long battle for two-wheeled supremacy, including the high-powered, street tire, concrete killers of McIntosh Machine & Fabrication Pro Street. The usual winning suspects such as Mark Paquette, Bud Yoder, Frankie Stotz, Doug Gall and Jeremy Teasley may struggle to adapt to eighth mile racing, opening the door to upsets by Justin Doucet, Quinn Orand, Rudy Sanzottera, and John Chant.

Except for Stotz’s little turbocharged Honda, all these guys ride turbo Suzuki Hayabusas. These turbo bikes may be at a disadvantage on Ohio Valley’s eighth mile against quick-reacting nitrous bikes.

MSP True Street has had two winners in its short two-race history, will that trend continue in Louisville? Orand and Teasley each have True Street wins on their resume, and you can bet that Gall is feeling left out on the MSP-prepped Uptown Funk bike that he rides in the class. With real hand clutches and an instant green light, True Street favors only the quickest and smoothest.

Route 21 Top Gas racers will tune to a 5.10 index on Ohio Valley’s eighth mile, throwing a real challenge into this and all the index classes that are used to racing the full quarter. Who will adapt best—smooth practitioners like Top Gas champion Greg Mallett or edgy characters like “Chicken Head” Chad Otts?

Crazy 5.70s just doesn’t have the same ring to it, but that will be the Crazy 8s index. The Millennium Trailers Super Comp index will be 5.60 and Streetfighter is 6.20. Chad Isley, Jim “Put it on the Underhill tab” Underhill, Spencer Claycomb, Dustin “Tennessee” Lee, John “Spooky” Markham, Shawn Books. Ben “The hardest working man in motorcycle drag racing” Knight, Brian Selner, Ron Arnold and many more will all be racing head-to-head for these titles. G&G Metal Spinners Pro ET and Dennis Insurance Street ET will, as usual, race all three nights.

Brian and Niki Welch look forward to welcoming the whole NHDRO family to their first ever Louisville race, and Ohio Valley Dragway will never be the same.

Norwalk was the one that Got Away for Ellis and Pippin