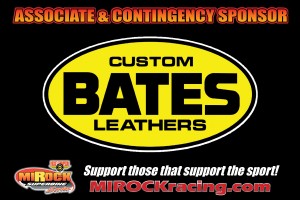 A new MIROCK season is just a few months away and as usual, promoter and event director Jason Miller has been busy renewing contingency and sponsorship deals. Here are some of the latest companies to commit to the 2014 season.

Bates Leathers has renewed their contingency sponsorship for the 7th year in a row and has posted $7,200 in MIROCK contingency! Bates Leathers is also an Associates Sponsor and will have a display at all MIROCK events and can measure riders for their own custom drag racing suit on the vendor midway! So be sure to stop in and see them at a MIROCK event.

About Bates Leathers: Bates Leathers has been making high quality custom racing suits for the last 50 years, and you can own one of your own! Give Bates Leathers a call at 562-426-8668 or visit their website at: www.batesleathers.com 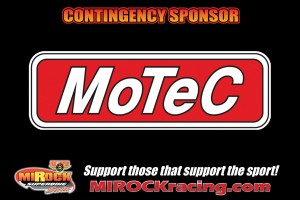 Motec has renewed their MIROCK contingency program for the 4th straight year and is continuing to give back to their racers with a whopping total of $13,200 in MIROCK contingency postings. Motec will once again be paying in all classes on Motec ECU’s and  Motec dashes.

Motec will also be paying out $50 to win and $25 to runner-up in all classes to racers utilizing a Motec CDL3, SDL3, ADL3, D153, and C (color dash) and running Motec decals on both sides of their bike.

About Motec:With its distinctive gold ECUs and a philosophy of engineering excellence, MoTeC has grown from a modest home workshop producing  a screwdriver-adjusted ECU in the late 1980s to a world leader in twenty-first century motorsport technology. Now boasting a network of over two hundred authorised dealers worldwide, and with main offices in Europe and the USA, this innovative Australian brand has become synonymous with motor racing success in almost every category across the globe. 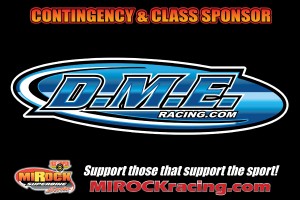 DME Racing has once again renewed their contract as the class sponsor for the Real Street class during the 2014 season, and is now the longest running sponsor of the class. Many of the Real Street bikes run DME components on their bikes such as swingarms, oil pans, fork shortening, and other parts. DME Racing has been a MIROCK sponsor for the last 7 years and have competed in the MIROCK Superbike Series themselves for the last 11 years. You can find DME Racing on the vendor midway at all MIROCK events with an impressive display of custom race parts in stock along with their team of the Pro Street bikes.

DME Racing has also posted a whopping $18,000 in contingency money for the 2014 MIROCK season for the third straight year on their oil pans and swingarms. So make DME your choice for swingarms and oil pans and get paid for it.

About DME Racing: DME Racing can handle all your chassis needs. They build custom Pro Street bikes, Real Street bikes, and Grudge bikes. They have a CNC machine and produce many trick custom parts for late model sport bikes. They built the first 60” bike to run in the 7.60s and have built numerous 6-second, 210+mph Pro Street bikes . From swingarms, billet oil pans, short necks, to a full custom chassis, DME can handle it all. Give DME Racing a call at 336-785-4845 or visit them at www.dmeracing.com 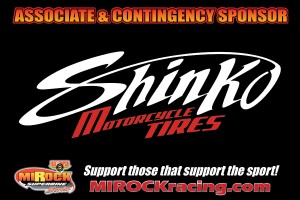 Shinko Tires has renewed their contingency sponsorship once again in the MIROCK Superbike Series. Shinko Tires are distributed in the U.S. by WPS (www.wps-inc.com). Shinko Tires has posted $7,200 in the 2014 contingency program, and will also have a spot on the vendor midway selling Shinko tires at all MIROCK events. So make Shinko your tire choice and earn extra cash back.

About Shinko: You can find out more about Shinko Tires by visiting their website at: www.shinkotireusa.com

Fast by Gast has renewed their 2014 event sponsorship of the Spring Nationals, Summer Nationals, and Fall Nationals at MIR for the 13th straight year. Fast by Gast is also the Pro E.T. class sponsor, which is the biggest class in MIROCK. Fast by Gast still continues to show their support for MIROCK and its racers and is one of the longest running sponsors in our series.

“We can always count on Paul Gast and the Fast by Gast staff at MIROCK. They are here to support the Pro and Sportsman racers in our series and without the support of Fast by Gast, MIROCK would not be what it is today.” stated by Jason Miller, MIROCK promoter.

FBG president Paul Gast says, “Fast by Gast is pleased to be back again year after year as always. FBG has been a series, race, and class sponsor in the sport of motorcycle drag racing since 1973 and still supports its racers today! I believe what goes around, comes around. Maryland is one of our better sales states and we thank the racers for their business. Good luck this year and we will see you at the track!”

About Fast by Gast: Fast by Gast specializes in motorcycle drag race parts and services.  Parts like FBG Lectron, Mickey Thompson, APE, MTC and much more.  Services like blocks, heads, and transmissions. Contact FBG by email at fbg1@aol.com, by phone at 800-866-3880 or visit www.fastbygast.com