Michael Ray Moves up to No. 4 in the Countdown 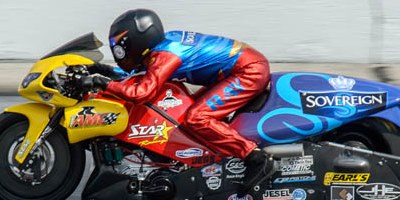 Sovereign-Star Racing’s Michael Ray raced to his fifth semifinals appearance of the 2013 season this past weekend at the AAA Insurance NHRA Midwest Nationals and advanced to the No. 4 position in the NHRA Mello Yello Series Pro Stock Motorcycle
Countdown to the Championship.

Ray moved up one spot in the overall points standings from No. 5 to No. 4, leaving
him only 17 points, or less than one round of competition, out of the second
place position.

“They haven’t given anyone that Championship title yet. There’s a lot of racing still
left to go, and I’d say we’re definitely not out of this yet. We may have an
uphill road towards winning the Championship, but anything can happen on
Sundays. You can go from hero to zero. I think if we can keep up this
consistency that we’ve shown, then we can keep turning some heads and have a
real legitimate shot to go win (the Championship),” Ray said.

Over the weekend at Gateway Motorsports Park in St. Louis, Mo., Ray set the low ET
(Elapsed Time) of the round twice during qualifying and posted the second and
third lowest ETs for the other two sessions, earning a total of nine bonus
points towards the Championship.

“As a team, I think we did twice as good as we did in Dallas as far as consistency
and performance. Out of seven runs on three different days, Michael’s average
was a 6.852 (ET). Also, Michael’s 196.99 mile per hour from Q3 (qualifying
round three) was the second best mile per hour ever for our company,” Star
Racing owner George Bryce said.

Ray was the No. 2 qualifier going into Sunday’s eliminations after setting a new
career best ET of 6.830 seconds at 196 mph during Saturday’s qualifying
sessions.

The team’s S&S Cycle-powered Buell continued to produce consistent numbers
during Sunday’s elimination rounds, beginning with Ray’s 6.860-second win over
No. 15 qualifier Shawn Gann’s 6.939 pass in round one.

Ray advanced to the second round to face No. 10 qualifier Jerry Savoie. Ray turned
on the win light and set the low ET of the round after improving from his
previous time to a 6.855 ET against Savoie’s 6.919.

In the semifinals, Ray was up against No. 3 qualifier Matt Smith, who took the win
after Ray left too soon from the starting line to turn on the red light.

“Overall, it was a great weekend. We really improved our consistency on both sides. Our motorcycle ran well and I did a really good job of driving the bike, but
unfortunately in the semis I pushed the tree too hard and came up on the wrong
side of the light. I didn’t really change my routine any; I was just a little quicker
on the trigger than I had been (the previous runs),” Ray said.

With such short notice before the St. Louis race, NHRA would not allow Sovereign-Star
Racing to enter Chaz Kennedy as the replacement driver to pilot their second
motorcycle at the event. Kennedy, a 19-year-old recent high school graduate,
has been training with Sovereign-Star Racing throughout the 2013 season because
the team had planned to have him race their new Pro Stock Suzuki at the last
two events in Las Vegas and Pomona. The team now plans for Kennedy to make his
first pass in NHRA Pro Stock Motorcycle this coming weekend in Reading, Pa., on
the Buell left empty by Pollacheck’s resignation.

“We have three more NHRA Nationals left to go to this year. We will start again
this Friday with Michael (Ray) and Chaz Kennedy and will be trying to improve
their personal bests even more. I’m looking forward to running on Friday at
Reading. We always go fast there. We have a lot of good history there, and I’m
excited to see how well Chaz does,” Bryce said.

The Sovereign-Star Racing team will compete this coming weekend Oct. 4-6 at the
Auto Plus NHRA Nationals at Maple Grove Raceway in Reading, Pa.