– Big crowds, great racing and a tremendous show were only part of the storyline coming out of this past weekend’s IHRA San Antonio Nationals presented by Good Vibrations Motorsports at San Antonio Raceway.

Two records fell by the wayside in one of IHRA’s oldest classes and another was nearly bested all on a memorable night of racing at one of IHRA’s premier Nitro Jam events.

John DeFlorian, from Arnold, Missouri, set both ends of the IHRA Pro Stock World Record, all in his final pass of the night, behind the wheel of his Black Diamond Motorsports 2013 Chevrolet Camaro. With his first career Ironman on the line, DeFlorian bested Oklahoma’s Cary Goforth in the final of Mountain Motor Pro Stock with a blistering 6.224-second elapsed time at 226.70 miles per hour, good enough for the new mark in both categories.

The old records, which have stood since 2008 and 2007 respectively, were both broken in commanding fashion. DeFlorian bested the mile per hour mark by a whopping 2.75 mph and he bettered the elapsed time mark by .027. The old records, held by Frank Gugliotta and Brian Gahm respectively, stood at 6.251 and 223.95.

“These records are something each team likes to brag about and go after and to come away from here with the win and the record is pretty amazing,” DeFlorian said after taking the win in San Antonio. “We felt like we could get after it, but I never dreamed we could come out here and put down a number like that. I was thinking maybe 225 tops. To set the record and get the win against a great team like the Goforths just makes this even more special.”

DeFlorian set the new speed mark earlier in the day, but his final pass of the night increased the record by another two miles per hour.

In Nitro Funny Car, Jason Rupert continued on a torrid pace with his second consecutive IHRA victory while almost setting a new speed mark in the Bays and Rupert “Black Plague” Camaro. Rupert’s final pass of the weekend, a winning 5.764, 252.38 over John “Bodie” Smith in the “Jungle Jim” Vega, came just a fraction shy of the record. Rupert bested the current record, set by Peter Gallen at 252.10 in 2011, but he was unable to back it up, coming less than one mile-per-hour of setting the new mark. 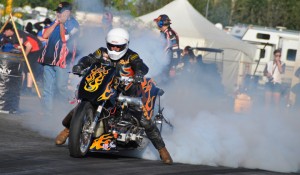 The record-breaking weekend in San Antonio follows up another record weekend in Tucson that saw Louisiana rider Randal Andras break the 13-year old Nitro Harley speed record with a pass of 228.31 miles per hour.