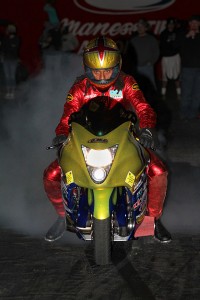 Showing no sign of teething pains with two brand new bikes, the DME team of riders Joey Gladstone, Jason Dunigan, Terence Angela and Ehren Litten locked out the top four Orient Express Pro Street qualifying spots at the Adams Performance Spring Bike Open at Rockingham Dragway—opening round of the 2014 Mickey Thompson MIRock Superbike Series. And all DME bikes were still alive when rain, wind and unseasonably cold temperatures shut Rockingham down after only one round of eliminations on Sunday. The team will get a chance to do even better when the race is finished back at The Rock in August.

7.12, Angela’s 7.15, and Litten’s 7.39 (also on a brand new bike). “The new bike is awesome!” said Gladstone. “It was kind of scary to make the first pass because it’s so nice and I didn’t want anything to happen to it.” Last year, while pre-season testing on a cold track in Maryland, Gladstone had a bike wash out from under him—destroying a brand new, signature DME paint job. This year the team went south to Florida to test, but got very little track time while there.

Round 1 of eliminations saw the bikes run 7.01 (Gladstone), 7.02 (Angela), 7.08 (Dunigan) and 7.37 (Litten). “Hats off to (Rockingham owner) Steve Earwood and his track prep crew,” said Skip Gladstone, Joey’s father and the team’s engine builder. “They really have a grasp of what Pro Street bikes need for a track surface. The consistency of their track prep allowed us to be consistent, and consistency is what we strive for.”

A team performing at DME’s level also needs a lot of support from the performance industry. “This season we have a lot of new marketing partners,” continued Skip. “Including Bob Blouch at Blouch Performance Turbo of Lebanon, Pennsylvania. They are a Garrett distributor and manufacturer of their own performance turbos. They were instrumental in us being able to sell the blue bike (last year’s championship winner) and get it to the Middle East with a fresh turbo and spare parts very quickly. Their stock is phenomenal.

“And Vance & Hines and their cylinder head program. We’ll also be selling and marketing their services at the track. You can drop off a head at the track, and we’ll get it into their hands and get it turned around for you very quickly.”

Joey’s bike is the one sporting the very professional looking Vance & Hines paint scheme. “Team DME did an amazing job on the bike, paid so much attention to detail, and really made a nice piece,” said Joey. “Vance & Hines is a huge part of the team this year and we are really excited to work with them and see what the future holds.”

DME will also be representing longtime Pro Street sponsor Orient Express on the midway at all the races this year. “We’re really looking forward to representing Orient and working with Skip Dowling, Joe Hahn and their people,” said DME boss Dimey Eddinger.

“We’ve also increased our involvement with APE,” added Skip Gladstone. “It’s important to me as an engine builder to have a close involvement with a company like APE. We use their lightened crankshafts on our turbo bikes.”

Lucas Oil has increased their support of DME’s program this year, as have VP Fuel, DCE Electronics, and CP/Carillo.

In addition to their Pro Street success at The Rock, the team brought out the brand new, European Super Streetbike-spec, e85 fuel ‘Busa of British champion Steve Venables. The bike features a tube frame chassis built by DME for Venables, and was shook down by Joey with a 6.98 at 209 mph at The Rock. “As a dad, Joey never ceases to amaze me at his ability to adapt,” said Skip Gladstone. “He’d never thrown a leg over that bike before, and I’m a proud papa.”

Everyone at DME and all their marketing partners have every reason to be proud of the team’s flawless performance at Rockingham.