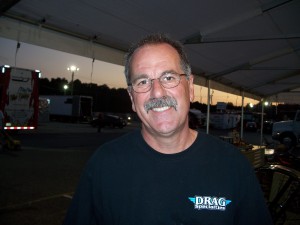 Top Fuel Motorcycle legend Larry “Spiderman” McBride has amassed 10 championships and numerous world records throughout his illustrious 33-year career.  The Spiderman has achieved the vast majority of his success on his current drag bike – a 1,511 c.c., supercharged Puma that McBride has been competing on since 1994.

Over the years the motorcycle has been branded as both a Kawasaki and a Suzuki depending on which manufacturer offered contingency money at the time.

It was on this iconic machine that McBride became the first rider to record a five second pass in 1999. In 2008, McBride established the current world record at 5.79.  Unofficially, McBride has been as quick as 5.74, and now, in what is likely to be his final season racing this motorcycle, McBride is aiming for 5.60s.

“We have the power to do it,” McBride said.  “The 5.74 wasn’t a perfect pass.  It’s just a matter of getting the power to the track.  That’s always the challenge. 5.69 is the goal, and I believe we can accomplish it.”

McBride is in the process of assembling a new, state-of-the-art Top Fuel bike he hopes to debut this summer and compete on next season. The new motorcycle will feature an adjustable 104 to 108-inch wheelbase. The total length of the new motorcycle, from the tip of the front tire to the end of the wheelie bars, will be over a foot longer than McBride’s existing ride, at 18.8 feet.

The bodywork, which McBride is currently waiting on, will also be slightly different.

“We have some NASCAR guys making the body and right now they are really backed up getting ready for Daytona.  First, they make one out of scratch aluminum, and then they make the final product out of carbon fiber,” McBride said. “We are making minor changes to the body and the fairing will be a lot different.  It is going to be much wider to try to get some air off of the handlebars and my hands.”

As for the old bike, McBride plans to showcase it somewhere when he retires it.

“I’ve talked to Don Garlits a few times and he is definitely interested in having it on display at his museum in Florida,” McBride said.  “I’m not sure where it will end up.  It would look pretty cool in the front of my shop too.”

Along with working on both of his Top Fuel bikes, McBride has had a busy off-season scheduling for 2011, setting up appearances, match races and testing dates.

The 10-time champ plans to attend the upcoming Dealer Expo in Indianapolis, Ind., Fed 18-20, where he will sign autographs at the Web-Cam booth. McBride also plans to display his motorcycle in Daytona, Fla., during Speedweek.

“I think it will be a great opportunity to promote Top Fuel Motorcycle racing,” McBride said of his upcoming trip to the Sunshine State.

Along with both Manufacturers Cup races, McBride plans to participate in the Norwalk Night of Fire and possibly some ADRL events.  McBride says there are several other potential match race dates, but nothing set in stone at this time.

Master of the Motorcycle Racers from the 2012 Season: Scott Levasseur