McBride Racing Continues on in Light of AMA Dragbike Closure 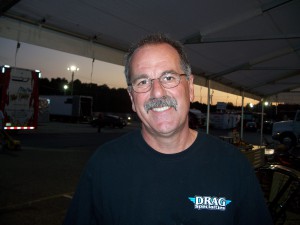 Last week Top Fuel dragbike legend, Larry “Spiderman” McBride received the kind of news a racer never wants to receive. The organization he had competed in for over 20 years, AMA Dragbike, has ceased operations.

“We could sense it coming but we all hoped it wasn’t going to happen. It’s very unfortunate. I have a lot of great memories with the organization,” McBride said. “Despite the announcement, our racing program will most certainly continue on. It’s a new beginning for us.”

Already booked for two independent motorcycle shows, The Virginia Mid Summer Bike Bash at Virginia Motorsports Park in Petersburg, Va. on July 10th and PINKS All Out at Summit Motorsports Park in Norwalk, Ohio, Aug., 27-28, McBride says since the closing of AMA Dragbike, his phone has been ringing off the hook with different promotions expressing interest in bringing the world’s quickest motorcycle to an event.

“This is a blessing in disguise because I am going to be able to give my sponsors even more exposure and publicity,” McBride said. “We have been approached by some pretty big shows and races that draw over 30,000 spectators.” 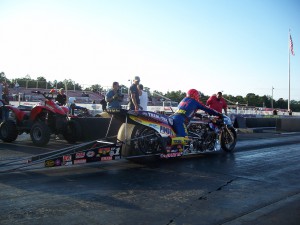 McBride has also had talks with the ever-popular ADRL and AMRA.

McBride is so confident his racing program will carry on, he will continue to build his brand new state-of-the-art Top Fuel motorcycle.

“I’m headed down to North Carolina next week to pick up some really slick carbon fiber body work,” McBride said. “I have no worries about continuing to build this bike. I am very confident that we will always have places to race. I truly believe someone will come along and put another series together for next season. I hear there are several individuals interested in picking up AMA Dragbike.”

McBride, now in his 32nd year of racing, was with AMA Dragbike from the very beginning. He watched it evolve from it’s inception in 1989 under the IHRA banner to its most successful era, known as AMA Prostar. It was here McBride competed alongside legends like his mentor Elmer Trett.

From the turn of the century, until the time the organization changed ownership in 2006 and later became AMA Dragbike, McBride dominated the Top Fuel category, amassing 10 championships, world records (5.79 ET, 245.36 mph) and a whole pile of fond memories.

“From my battles with Elmer to the bitter end, I was truly blessed to have enjoyed many years of great racing memories,” McBride said “And were not stopping yet.”

McBride’s dominance continued in 2010. He had a commanding lead in the point series and was almost certainly headed toward an unprecedented 11th championship.

“I guess I have 10 and a half championships now,” laughed McBride.

McBride did offer some advice to prospective new owners of a motorcycle drag racing series.

“They have to find a way to get metric and American made motorcycles at the same racetrack. It’s got to happen that way,” McBride said.

McBride extended a special thank you to all of his sponsors

“Thanks a lot for hanging in there with me,” McBride said. “We are going to keep you in the lime light and continue promoting your products.”