McBride in Search of Championship 11.5 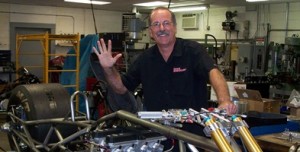 Top Fuel legend Larry “Spiderman” McBride is aiming for what he calls championship No. 11-and-a-half at the Manufacturers Cup from Valdosta, Ga., Nov 9-11.

Throughout his many years or racing, Spiderman earned 10 season-titles, and was well in control of the point series when AMA Dragbike went out of business in the middle of  2010. McBride likes to think 2010 counts as a half.

Veteran McBride finds himself in unfamiliar territory entering the Cup.  The most dominant Top Fuel racer of the past decade is used to having clinched the championship before the tour’s final stop, but because McBride missed one of the Cup’s three events, Spiderman enters Valdosta needing to make up ground.

McBride is second in the point series, tied with Harley-racer Tommy Grimes, and 25 points behind leader Chris Hand.

Winning the championship will be no easy task.  Five top-notch teams from Europe will join McBride’s usual rivals.

“I think it’s great for the class that teams are coming all the way from Europe,” McBride said. “We could have 14-15 motorcycles.”

McBride, along with his crew chief and brother, Steve, departed their Newport News, Va. shop on Wednesday afternoon with six extra motors in tow.