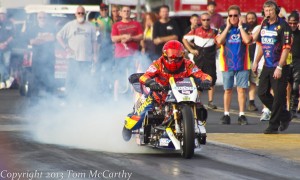 While the Indy race is dropped from the series, the addition of Atlanta Dragway keeps the series firmly on the east coast.