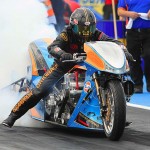 The team arrived in Oslo to find a country still numb with shock at the terrible events in this very city where 77 people lost their lives less than two weeks before. In a strangely peaceful moment at the racetrack next to the main Oslo Airport runway a minutes silence was held in remembrance of those who tragically lost their lives.

Not for the first time this season the weather was none too kind when the first day of qualifying was cancelled due to heavy rain, but Saturday dawned brighter and the team took to the track for their first qualifier. And what a run it was with an off the trailer best for the all new machine of 6.254 secs at a fantastic 236.71 mph (380.95 kmh) to zoom straight into number one qualifier position, and despite a roll off the throttle at mid track. The speed was one half of a new European record if backed up within 1% and within the top ten fastest speeds ever recorded in the world. With two more qualifiers and raceday eliminations to come it seemed a new record was on the cards. 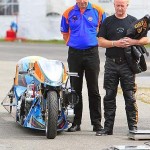 The second and third qualifiers of the day saw the team post the second quickest time of the day with a 6.41 (again with a mid track roll off the throttle) but no new record yet. However, they finished the day in number one qualifier position and were looking good for raceday.

Alas, it was not to be when the weather conspired to beat them on raceday and persistent rain ended the race prematurely without a Top Fuel Bike class wheel turned in anger.

The team left the event for the following weekend’s event in Germany with a slight improvement in their Championship position, but was disappointed at being unable to capitalize on their qualifying performance. A team favourite event, not least of which due to the large crowds, German team fans, luxury pit garages and the presence of an impressive team garage set up by their German based co sponsors Grand Prix Originals. 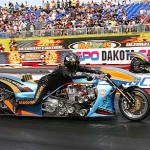 The team took to the track for their first qualifier to build on their stellar performance in Norway the previous week when disaster struck. A cam chain broke mid track and King coasted to the finish line without power.
Back in the pit garage the damage was worse than hoped; a number of valves were badly damaged and required replacing. However, the team did not have enough spares of the type required to completely repair the damage and spent the next hours feverishly scouring the world for replacements. However, the fact that it was Friday afternoon and the only replacements were in the US meant that they could not be delivered in time.

Not wishing to disappoint the fans on raceday the team decided on the risky option of repairing the inlet valves that were unable to be replaced and sitting out the remaining qualifiers and planned appearance in the impressive Nightshow.
The vagaries of the elimination ladder meant that the team would meet the veteran multiple British Champion Steve Woollatt in the first round. At the last moment (when in stage) King decided to risk complete engine devastation for the show and followed Woollatt up the track on partial 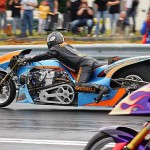 throttle before unleashing full power from mid track on. Unfortunately, the bike suffered a steering wobble that necessitated King rolling off the throttle before winding the power back on and chasing Woollatt to the finish. However, it was not to be as King just passed his opponent a few inches after the finish of what was a thrilling race.

To make matters worse for the team’s Championship chances an on form Peter Svensson and a fortuitous ladder for Petri Paljakka saw both dramatically close the gap on King’s lead and put them less than one elimination round win behind King going into what should be an exciting Championship finale in Santa Pod, UK from 8th – 11th September.