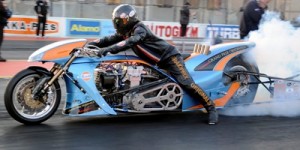 Hot, sunny and most importantly, rain free conditions were forecast for the weekend
and it looked as if the exuberant fans of over 60,000 were in for a thrilling
FIA and UEM race event.

However, rumours of a track problem initiated from the previous weekend’s Test and Tune
event were confirmed upon arrival at the track.For those who may be unaware, Hockenheim boasts both the F1 circuit and the
standalone permanent dragstrip. As can be seen the F1 Circuit does not share
any part of the dragstrip, but the run off area from the famous Sachs Curve indeed
does:

According to the organisers there is a requirement from the FIA that `excessive rubber’
be cleaned from the track in this area. Although not a new ruling, it is
claimed the requirement was reinforced after a bad accident last year during a
GT Series race when a car ran over the edge coming out of the Sachs curve, hit
the wet from rain on the drag strip and then slid at a very high speed into the
wall, seriously injuring the driver.

The organisers claim the FIA said they would no longer sanction an FIA event of
any kind as long as the Drag Strip at the Hockenheimring was covered with
rubber and track bite and so they were `forced’ to clean the entire drag strip
from start area to past the finish line. This was completed in October last
year but unfortunately those responsible had high pressure cleaned the track
with 800 bar equipment that not only removed the rubber but also the bitumen
leaving the stone aggregate proud of the surface.

Disappointingly, this was seemingly only realised a few days before this event and despite
efforts by the track crew to sled and glue the surface it was to little effect.
After a number of incidents in qualifying the majority of the FIA Car
competitors held a meeting and it was decided that they would not race this
weekend. Conversely the UEM motorcycle competitors voted unanimously to race.

Final qualifying would prove that the track was very difficult for the +1000HP
machines, with King at `only’ fourth and current European record holder Peter
Svensson qualified in last position.

However, the team was quickly getting a hand on what was required to win here, judicious
use of the clutch, fuel and ignition settings coupled with careful and
responsive use of the throttle to keep the back tyre on the edge of breaking
away.

Proof of this approach was seen when King made a demonstration pass at the start of
the Night Show, recording a 7.09 second pass that was to remain the quickest
time of all the bike classes that day.

For the first round King was in the favoured right hand lane to face Finland’s Kai Selkaama but it
was a holeshot that proved the difference between the two riders, King away first 0.179s to 0.237s
and with a better sixty foot time of 1.165s to 1.230s. Selkaama’s tyre was up
in smoke by sixty feet as King maintained traction before starting to smoke
about 400 feet out and the bike started to move to the right. King feathered
the throttle and got back on it and stayed just far enough ahead to take the
win with a 7.118s @ 201.34mph to the Finn’s quicker 7.092s @ 204.76mph.

The semi final was to pair King against current European record holder Peter Svensson of Sweden, who had proceeded
through what should have been a tricky first round against number one qualifier
Rene van den Berg after the Dutch rider was shut down on the line with a fuel
leak, affording Svensson an unopposed bye run.

The final paired King against his fellow countryman Steve Woollatt, whose `Dealer’ team (including
former TFB rider Phil Baimbridge) were also using all of their experience of
running on variable tracks over the years to good effect this weekend.

The team next travel next to Tierp, Sweden for the penultimate round of the Championship leading both the
European and UK Championships and looking to defend their points lead.

The team are to contest all remaining rounds of the premier international championship in motorcycle
dragracing, the UEM Dragracing Championship:-

The
team is extremely proud to be supported by many leaders in their chosen markets
in their challenge for the 2012 European Championship:-

GRAND
PRIX ORIGINALS – The brand for drive and lifestyle, past and
present

PUMA ENGINEERING – Manufacturer
of the world’s most powerful motorcycle engines

VANSON LEATHERS – The most iconic brand in motorsport leather
goods

For more on information on King Racing,
visit www.kingracing.com

Zloop to Back L.E. Tonglet