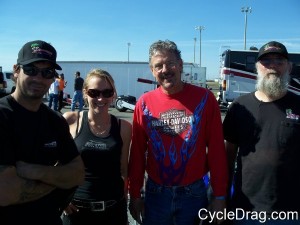 In Friday qualifying, Vickers qualified in the #1 spot with a 7.414 second run at 171.41 MPH. Tyler Wilson, still getting his sea legs back under him after crashing at the world finals in Bradenton last year, qualified in the #7 spot running just 1/8th mile shut off passes. Janette Thornley wound up #2 with a 7.486, Rich Vreeland on his Derringer was #3 with a 7.552, Bill Bentz was 4h with a 7.557 pass, Rocky Jackson was #5th, Ben Ard wound up 6th, and Scott Bennett riding Dale Nungesser’s magnum was in the #8 spot with a 13.380. Lloyd Stenerson rounded out the field doing his license passes. In a shortened qualifying session due to weather on Saturday, Vickers held on to the #1 spot going straight into eliminations.

In the end, the final round between Vickers and Thornley would have to wait until the NHRA race in Virginia to see who will hold the Wally as the rain moved in halting the race. So it’s on to Virginia and we will see what we can do there.