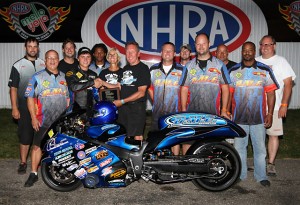 Dimey Eddinger’s DME Racing team rolled from Winston-Salem, NC into Lucas Oil Raceway in Indianapolis for the NHDRO/Manufacturers Cup Pingel Thundernationals expecting a tough race, but not a weekend of hard knocks off the track and a raging gangfight on it. The McIntosh Machine & Fabrication/Orient Express Pro Street class that the DME team races saw a huge turnout that just missed the all-time quickest field mark by only .005 of a second. 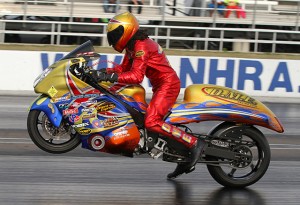 But before fists started flying at the track, break-ins and runaway cars struck the team on Indy’s mean streets. “Our car got broken into at the hotel and all three laptops were stolen,” said DME rider Joey Gladstone. “The next day we go to the Quik Stop to get our Red Bulls and ice and stuff, and I look back and there’s a pick-up truck rolling through the parking lot with nobody in it and it nails us. Smashed in the rear fender, so our car got demolished this weekend.” 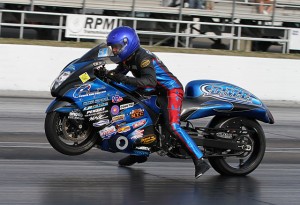 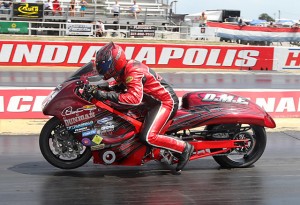 And then 6s came raining down in eliminations, with Frankie Stotz recording the NHDRO’s first ever 6 second street legal pass. Angela lost to Doug Gall in round 1, Dunigan lost to Teasley in round 2. Stotz got beat by Gladstone’s 213 mph blast in the semis, and Teasley lost to the surprising supercharged ‘Busa of Tony Ficher’s 6.96 in the other semi. “I went 6.97 in the semis and didn’t even get lane choice for the final,” laughed Gladstone, always game for competition. “That’s awesome. That’s actually really cool.” 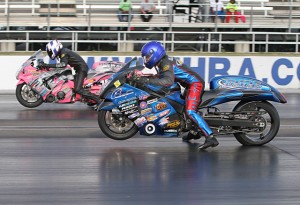 With both bikes running mid 6.90s and the win on the line, the final was setting up to be a real featherfest as track and ambient temps lowered. “That kinda made me nervous, because it got cooler,” said Gladstone. Ficher took the tree but slowed to a 7.03 while Joey ran a 6.99 despite a high speed wheelie on the big end. “It looked like it was gonna be a replay of the final from last year against Bud (Yoder) when I wheelied and he won. But this time, luckily, I plugged another gear and it came down and stayed in the groove. The stars aligned and we won. That’s what racing is about right there—competition! Supercharged bikes going 6.96!”

“We didn’t touch the tune-up at all for the final,” said DME Crew Chief Andy Sawyer. “Cooled it down, gas-air-and-ice, that’s all we did.

“I didn’t know if I could pull it off,” admitted Gladstone. “I had some doubts this weekend. We went a 7.01 to lead the first qualifier, then had an electrical issue and struggled the next two rounds. Everybody was going quicker, so naturally you get nervous.”

“We had a little electrical issue, and in the second round of qualifying, the bike just took off and fell on its face,” said Sawyer. “A relay center had acted up and we changed it. Everything seemed to be good after that.

“Then it was pretty much just trying to fight a wheelie. The weather’s perfect, the track was killer and would take everything you’d throw at it—which was too much. We finally stopped being bullheaded and took some power out of it and went the .97 in the semi.

“Then we went right back out there for the final and wheelied at 1000 foot. But the stars lined up and we won anyway. We had debated taking power out, but not at the spot in the track it wheelied. But it all worked out anyway.

“The big tuning feat this weekend was working with three bikes. We were chasing some issues with Jason’s bike that sent us in a big circle that we finally found.”

“Jason’s bike had a hydraulic problem on the clutch that just kept haunting us,” said DME boss Eddinger. “But Jason still ran his personal best, and we ran our personal best with Joey’s bike. Terrence had some issues and made a rookie mistake. He’s dealing with it and learning.”

With Maryland International Raceway’s huge $10,000-to-win Battle Royale coming up in October, Pro Street competition is expected to get even more intense. “We were just talking about how this is a warm-up race for the Battle Royale,” said Sawyer. “With all the bikes here qualified in the .0s, all the 6 second runs on Sunday, all the personal bests—it’s just crazy. I think we’ll see a bump spot there in the .30s. You could say the .20s, but that’s gonna be tough. There’s a lotta fast bikes here, but all the HTP stuff will be there, Rodney Williford will be there, and they’ll all be throwing everything they have at it. That’s three 6 second, 7.0 bikes that weren’t here.”

“This weekend started out as crap for us, so I’m really glad it turned around. Karma rolls around and we won, so I guess maybe that stuff earlier in the weekend was worth it. I’m so happy the way the day turned out for my team and our sponsors. It’s unreal, I’m blessed. My team did great this weekend. They’re above and beyond. They’re 98% and I’m 2%. I’m just lucky to be able to do the fun part and I couldn’t do it without them.

“I also want to thank the NHDRO and the Manufacturers Cup for having us, and Cole Seitzinger from Penske Shocks. We wouldn’t be able to do a lot of the stuff we do without having him here. And I’m happy to win this one for my dad Skip. It’s his birthday and last year I couldn’t win it for him, so it’s awesome.”