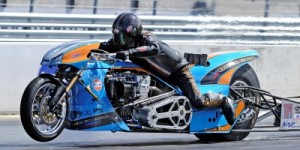 Along with the usual members the team will be joined over the three days by a TV crew of five people from Discovery Canada’s in-house production company who will be filming the team as the subject of an episode for season two of the series `Megaspeed’.

The first season doesn’t begin airing in Canada until June, but the company has already begun working on season two. The series is comprised of 6 one-hour episodes, each tells 5-7 stories anchored by a main story of a large racing event. In their first season they filmed at events such as Goodwood in England, the European Rally in Italy and Baja 1000 in Mexico.

They profiled supercars such as the BAC Mono, the Drayson Electric car as well as “dreamers and schemers” such as a jet-powered school bus and Parker Bros concept cars.
MegaSpeed will be distributed worldwide following its debut in Canada.
The team currently lead the US Top Fuel Bike Championship after their recent successful trip to the opening round of the Manufacturers Cup in Valdosta, Georgia where they made history by taking the last remaining spot in the MTC Engineering Five Second Club.