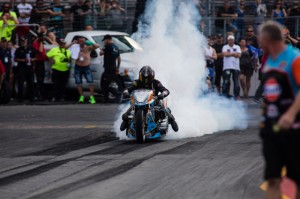 The Gulf Oil Dragracing – Grand Prix Originals team headed to the penultimate race of the 2014 FIM European Dragracing Championship with some trepidation.

Despite its status as the biggest event on the European tour with an estimated 50,000 spectators in attendance, reports of over aggressive cleaning of the Hockenheim track to meet the demands of the recent Formula 1 race had once again significantly reduced the traction available that did not bode well for the 1500HP Puma machine.

In addition, Manufacturers Cup promoter and race director Jay Regan and his brother Gunster from the USA were guests of the team who were eager not to disappoint their illustrious friends from `across the pond’.

The team was on a winning streak extending back to European season opener in 2013 and despite the traction problems experienced by almost all car and bike competitors the team used all of their experience gleaned whilst racing and showing on marginal tracks across the globe to win low qualifier, low ET and event win honors with the added bonus of a `Best Appearing Bike’ trophy. 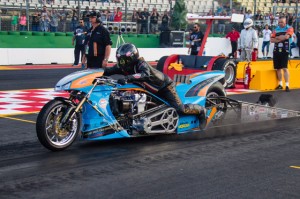 Not only that but the team gained an official timing ticket that reported a 252mph terminal that would put them in second place in the all time fastest list. The team had made gearbox and sprocket changes for the race with overall gearing for speed but their data logging did not concur and so they remain skeptical as to the validity of the timing ticket. Further passes of 235.97mph and 232.16mph did not back up this `record’ under current regulations and just missed the existing record by one kilometer (with the two `slower’ speeds under the 1% rule backup rule) so a new record for the team would have to wait.

King’s opponent in the final (and also alongside King when he came flying past on the debated high speed) was Greek rider Filippos Papafilippou, now back on his nitrous PXM ride. Fast Fil had qualified in a creditable 2nd place running 198.26 mph on a 6.813 for second spot on the ladder and a new TS best for a nitrous funny bike in Europe. Despite his great weekend, Fil was no match for King’s event winning 6.461 secs.