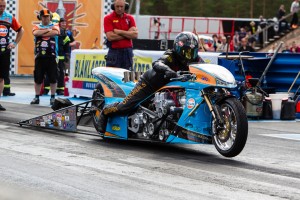 The Gulf Oil Dragracing – Grand Prix Originals team headed to the second race 2014 FIM European Dragracing Championship calendar with a slim Championship lead and with the comfort of an unusually optimistic weather forecast.
The `Nitro Nationals’ were hosted as usual on the multipurpose Alastaro circuit around 150 miles Northwest of the beautiful city of Helsinki.
However, they and their peers were faced with a very tricky track, in a precarious green state with its asphalt surface having been re-laid twice before the meeting (courtesy of an innovative racer funded project by the people at Drag Race Finland). The second instance was forced shortly before this weekend after the original composition was found to be out specification.

Rain over the preceding days meant that optimal track preparation was all but impossible and although there were signs that the track was improving by the end of the event, most of the cars and motorcycles struggled to get down the track without smoking their tyres for part, if not all of their runs.
However, the new super smooth surface bodes well for the future, and helps consolidate its position as one of the Gulf Oil team’s favourite venues.

While the track was some way off holding five second passes rider Ian King produced a series of numbers that often exceeded those he set last year and a 6.164 was on track record pace to head qualifying. King’s first round victory over Jan Sturla Hegre saw both bikes in the sixes with King prevailing in the all Puma match up with a 6.159 to further surpass his own track record.

Against Rikard Gustafsson’s Puma Pro1 Funnybike the Gulf Oil/GPO team looked to improve on the first round numbers but the top end performance fell away to a 6.261 whilst Gustafsson was caught out by the auto start when trying to hit the sweet spot during staging.

A new track record on a difficult track and the event win to further increase their lead in the Championship was a satisfying end to an enjoyable weekend for the team, but a customary wet end for the class winners….

The team move on to Hockenheim, Germany for the NitrOlympX on the 8th – 10th August for the penultimate round of the FIM European Dragracing Championship.
Pictures courtesy of Ivan Sansom and Rose Hughes.
For more information about Gulf Oil Dragracing go to www.gulfoildragracing.com
The Gulf Oil – GPO Dragracing team uses and endorses exclusively Gulf Oil greases and lubricants in their history making machine. The team is extremely proud to be supported by many leaders in their chosen markets in winning the 2013 European Championship and in their 2014 endeavours:-