Eric McKinney’s bike was dripping oil by the time it finished a 4.09 at 177.16 pass in the Drag 965 Pro Extreme Motorcycle final to handily defeat a 4.36 at 156.19 by first-time finalist Ricardo Knights. But that didn’t matter to the defending PDRA champion, who was the only rider to remain in the 4-ohs through all four rounds of eliminations, too, beating Wes Hawkins, Travis Davis and Dave Norris in the preliminaries. 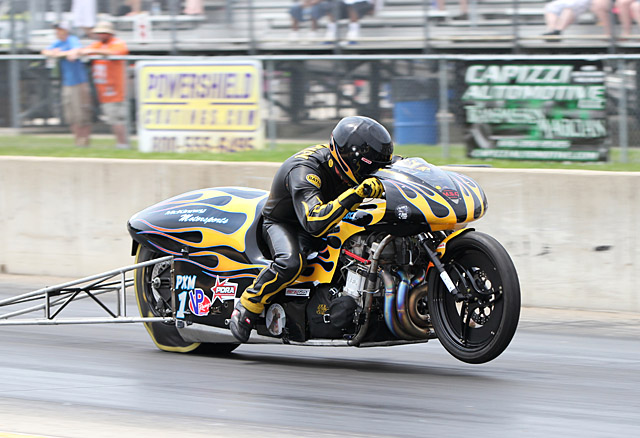 “We had to change the motor right before the semis, put old faithful in it, and it pulled us through,” said McKinney, who started from the number-one position with a 4.05 at 176.28 mph aboard the 2012 Suzuki tuned by teammate and crew chief Ashley Owens. “I think he got out on me, my reaction times have been terrible here all weekend, so I had to count on my team a lot this weekend. This thing makes a ton of power on the top end.”