Dave Vantine Explains the Road to a Personal Best 5.88 Run

The Hamilton, N.Y.-native moved up to sixth on the all-time quickest list with an astounding 5.88.

Vantine was kind enough to share the backstory to the remarkable run with Cycledrag.com.

“I’m not sure why my seasons go the way they do.  I have noticed that for years now my seasons start off slow and I seem to get better throughout the year which makes sense but what doesn’t make sense is why I can never start the new season where I left off in November and progress from there.

This season there is a small explanation in that were trying some new things that didn’t pan out and little did we know our superchager was getting tired.  In preparations for the Atco event we were warming the bike up and checking for leaks when the supercharger seized.  The motor just stopped dead and we thought how could we have seized this motor? It was just freshened up and we put it in the frame this morning and checked all the timings.

We took the supercharger off and there was metal in all the intake ports, it was a miracle none of it entered the motor.  We put on the spare supercharger and a brand new fuel pump.  So we get to Atco and Larry and Steve McBride come over and I tell them what happened.  They give the bike the once over and discover two screws missing on the butterfly.  So we know the ground up metal in the ports were the two screws going through the supercharger.  As a friend of my would say “That’s just great.”

We all know what happened in Atco, spin fest, and here’s why.  Between the new fuel pump, which flowed better, and the new supercharger that flowed 30 percent more, yes 30 percent, more than the previous one. We had a monster on our hands.

We kept taking power out but the air was getting better faster than we could take power out.  After the fateful run with Larry we went out there on Sunday and didn’t go 20 feet before the tire let go.

Fast forward to the IDBL Fall Nationals.  On Friday we decide we need to test and we also decided that we need to calm this thing down, and by the way, the air is even better than it was in Atco.  We took out everything, we slowed the supercharger down, lowered the nitro percentage, took timing out, took weight off the clutch, moved the clutch engagement out so it applied later in the run.

The result is the thing couldn’t even keep the nitro lit, we sputtered to about 400 feet and I shut it off.  Perfect! We have a graph to look at which is more than one inch long – lol.   So we go back and put a fair number of things about three-fourths of the way back to where they were and went out and made a second test pass. We came up with a 5.98 at 227 mph.  Thank God, we’re back in the fives for the first time this year. Now can we do it again? 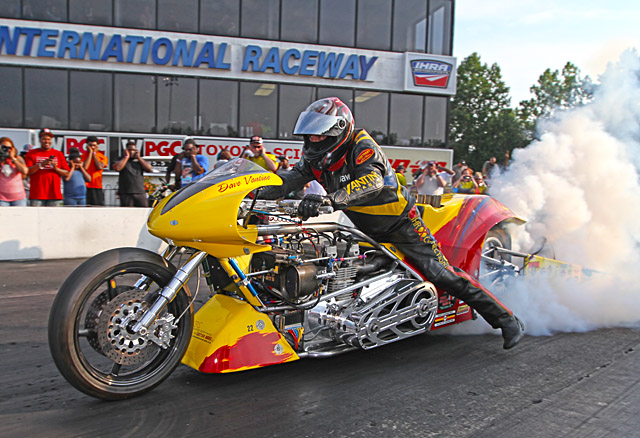 The evening run was cancelled as there were several oil downs and it got late and cold so they cancelled our second run which neither Bob nor I minded.  Nitro is tricky stuff and we have never run in air like that so we were happy with the decision. 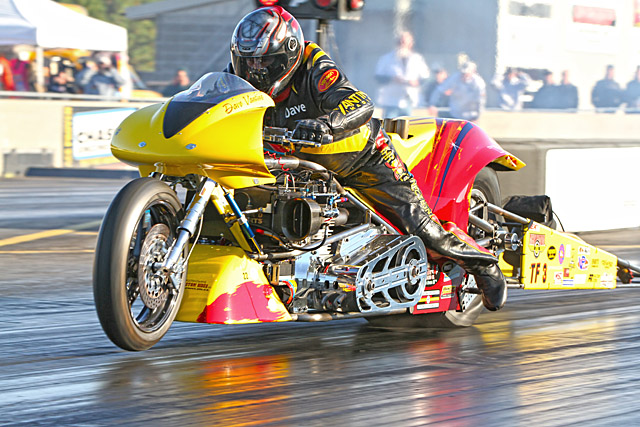 On to Sunday, our first run on Sunday neither Bob nor I made it down the track.  I’m not sure what happened to Bob but a T-Shirt that Billy Vose use to wear 20 years ago popped into my head “Pussies Will Never Be Heroes”, yes, we took power out because the air was so good and it started dropping holes (sputtering) and had to shut it off. Yes, we were being wimps!

On the final run on Sunday afternoon Bob couldn’t make the call as he had hurt something and we had the “so what do you want to do” discussion in my camp.  I said I’d like to leave here with anything less than a 5.891, which was my personal best at the time, so whatever you took out, put it back in and then some.

IDBL Battle Royale to Angela, Championships to Many