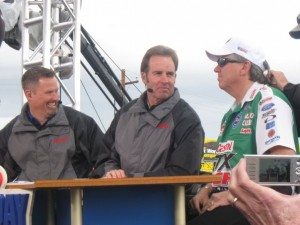 When the newly re-named NHRA Mello Yello Drag Racing Series begins its 13th season on ESPN later this month, a name and voice familiar to fans of the series will be in a new role on ESPN’s television coverage team.

Dave Rieff, who has been a pit reporter since ESPN began its NHRA coverage in 2001, will move into the anchor announcer position for the 2013 season. Rieff will host ESPN’s telecasts of both the Mello Yello Series and the NHRA Lucas Oil Drag Racing Series.

The season begins with the 53rd annual O’Reilly Auto Parts NHRA Winternationals in Pomona, Calif., Feb. 14-17. ESPN2 will air same-day coverage of qualifying on Saturday, Feb. 16, at 10 p.m. ET and same-day coverage of eliminations on Sunday, Feb. 17, at 8 p.m. In addition, ESPN3, ESPN’s multi-screen live sports network, will have live coverage of Friday qualifying at 5 p.m. on Friday, Feb. 15, with the full day of eliminations live on Sunday starting at 2 p.m. All of ESPN’s NHRA coverage can also be seen on computers, smartphones and tablets through WatchESPN and the free WatchESPN app for those who receive their video service from an affiliated provider.

Rieff will call the action from the booth with analyst Mike Dunn, who is beginning his 12th year with ESPN. The former racer is one of only three drivers in NHRA history to win more than 10 times in both the Top Fuel and Funny Car classes. Gary Gerould, John Kernan and Jamie Howe will report from the pits and trackside.

“I’ve been very lucky during the 17 years I’ve been involved with the NHRA to be around many of the greats of the sport, both television personalities and public address announcers,” said Rieff. “People like Dave McClelland, Steve Evans, Bob Frey, Marty Reid and Paul Page.

“Little did I know all those years ago I’d end up getting to know these great people and would be able to work with them and glean as much knowledge as I could. I’m very grateful for this new opportunity and hope to be able to take the best of the best from each of these men and bring it to the forefront.”

Rieff and Dunn have previously worked together in the booth on some ESPN3 qualifying shows as well as co-hosting some other drag racing programs on ESPN.

“It’s always a great opportunity just to get to sit next to Mike and talk about drag racing,” said Rieff, “It’s like one of those sitting around at home on the sofa situations, two guys that really love their sport and come at it from different sides of the fence, so to speak, and we’re able to bring that energy and passion to the viewers.

“There’s so much anticipation for the upcoming season and I can’t wait to get started.”

The NHRA will be televised on ESPN networks in 182 countries and territories to more than 56.5 million homes, including coverage in Africa, Australia, Brazil, Canada, Caribbean, Central America, Europe, Middle East, Mexico, New Zealand and South America. In addition, U.S. troops and their families serving around the world in 175 countries and on Navy vessels at sea can watch NHRA through the American Forces Network.