Chris Matheson wind Round No. 2 of Australian Championship 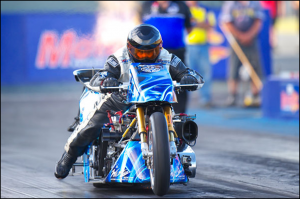 Australian multiple Top Bike Champion, Chris Matheson and his Nitro Voodoo Team won at Round 2 of the ANDRA Pro-Series Championship at the Perth Motorplex last weekend.

Matheson top qualified with a 6.403 at almost 200mph on a challenging track.  Perth turned up the head with the celsius reaching a blistering 37.5ºC with track temps well over 50ºC.

Matheson said “multiple oil downs, high track temps, it was far from ideal conditions, we had made some significant front end changes to the Nitro Voodoo bike to improve handling at the top end and were keen to test the changes.

The first qualifier on Friday night was planned to be a ½ track shake down, which ended up being a Top Qualifying pass, with an early shut off around the 700 foot mark.  Matheson said the front end improvements were noticeable, despite the challenging track conditions.

After a quick service to the bike, we went out to try to improve on the 6.403, however, slipped the rear tyre, dropping cylinders and not recording a representative pass.

By 10.00pm on Friday night, conditions had improved and we aimed to run a solid number to improve our position, as local racer and No.2 in the Championship points chase Mark Drew from Wild Card Racing had laid down a 6.649 second pass at almost 215mph. 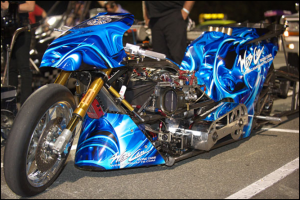 Matheson said “the Perth based Wild Card Team raced us in Sydney in the finals of the Nationals and were red hot favourites to send us home from Perth with our tail between our legs, as Drew was racing his home track”.

A major oil down just before our scheduled pass resulted in the third qualifier being scrapped from the schedule due to the 11.00pm curfew.

Race day was exciting, as we saw strong crowd numbers attending despite the warm conditions.

Matheson said “the bike was handling like it was on rails, a refreshing change!

The final was a re-run of the Round 1 Nationals, as the two quickest Top Bike racers in Australia were to face off in the final.  Matheson current No.1 plate holder and Drew vying for the Championship points.

Matheson said his Team undertook a scheduled engine swap before the final to ensure the best opportunity to lay down a winning number.

Matheson said “the Team can do an engine swap in 20 minutes, reset the clutch, change a rear tyre, replace the chain, bleed the brakes and load in a tune up all in 35 minutes, with time to take a break before the next race.  The two hour turn around really makes it a challenge if you have repairs or issues – all part of the race day event”.

With the new RBP Billet “Bullet” in the Bike, the Crew towed to the Staging Lanes ready to race. 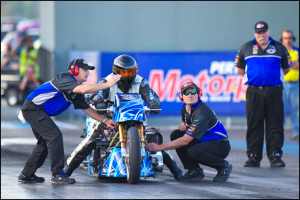 Matheson with lane choice after Top Qualifying, Crew Chief Roger Bloor went to the right lane, which appeared to be the better choice.  The usual banter in the Staging Lanes was fluid, however, both Teams were deadly serious and keen to get the win.

Drew, local favourite, desperate to win at his home track and get one back on Matheson, after losing in the Nationals to Matheson after smoking the rear tyre 60 feet from the start.

Matheson, current Champion and Series points leader and keen to brake his multiple bridesmaids result at the Perth Motorplex was eager to win two from two in the Pro-Series.

Typically, Bloor and Matheson watch closely as the top race cars and dragsters race before them.  Bloor a master of reading the track was focussed on the track as it appeared the cars were moving around at about quarter track, due to the hot slippery track conditions.

Regardless, it was show time and the starter called the two finalists to fire up.  Drew, known as the Ice Man and Matheson a proven racer, with two from two Championships under his belt, National Record Holder, both competitive each with equal opportunity to win.

Both machines smoked the rear tyres in the burnout, exciting the crowd as the anticipation was at fever pitch.

Matheson and Drew both launched hard, with Drew winning the start by a reaction of 0.119 to a 0.198.

Matheson soon caught Drew only to break into massive wheel spin, smoking the tyre as he took three stabs to try to hook up to catch Drew.

Drew raced to the finish line crossing the centre line, taking out 2 cones, only to be disqualified, handing the win to Matheson, who ran a 6.541 at 220 mph.

Matheson said “the tyre lit up and I knew it would be hard to run down Mark, despite peddling and trying to slow the rear tyre with the brake.  The bike moved towards the wall as it slid around chasing traction.  It was a fun ride, but usually doesn’t win races”.

Commiserations to Mark and his Team, they deserved the win, they had run well all weekend.

Matheson said a little luck from the track gods got us through, but a win is a win.  The Team worked hard as they always do in very hot trying conditions.  My guys are the best in the game and track record confirms that.

Matheson continues to lead the Championship with some 50 points ahead of No.2 Mark Drew.

At the halfway point, Matheson and the Nitro Voodoo Team are looking ominous to taking out their third Championship in a row.