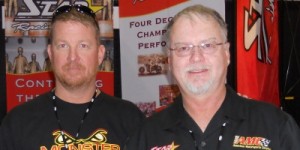 Star Racing recently received approval from the FAA (Federal Aviation Administration) for the future Americus Motorsports Complex (AMC) redesigned site plan. After months of waiting, this news marked another major step in the lengthy planning process for the motorsports complex.

The approval process with the FAA is a requirement of Runway Protection Zone (RPZ) regulations that limit the height of any structure and restrict gatherings of people. The area included in the RPZ extends beyond the end of the runway at Jimmy Carter Regional Airport, and, therefore, includes the east corner of the AMC’s land. Due to RPZ regulations, the Americus Motorsports Complex had to relocate and redesign certain elements of the original site plan to comply with these federal requirements.

Although, the complex has been redesigned, the original elements of the facility remain the same and include a business technology park, dragstrip, road race course, training center and autominiums. All facilities will be designed with both cars and motorcycles in mind. The idea of the Americus Motorsports Complex is to provide a comprehensive motorsports experience where people can live, work and play within the complex.

“We are very pleased with the FAA’s approval of the site plan; but, at the same time, we don’t want people to think that we’ve changed our plan because of this,” Star Racing co-owner Jackie Bryce said. “All the elements of the original layout are still there, we just had to rearrange them so that they complied with the RPZ regulations. The FAA approval was also another life lesson for us to have patience with the process since it tends to go much slower than we would like. We’re used to going fast!” 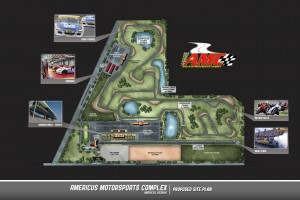 The next step in the pre-construction phase is to mitigate any wetland areas located on the property. Federal environmental regulations require that potential wetland areas on the property be identified prior to construction. Also, if the wetlands connect to other drainage ditches or ponds, they are considered a part of the local watershed and require that mitigation credits be purchased before the U.S. Army Corp of Engineers will grant the proper permits for construction.

As the planning process continues, the Star Racing team is working continuously to promote the new complex to other motorsports companies, racers, potential investors and sponsors outside of the local community. After several months of preparation, the Star team traveled to Orlando, Fla., recently to unveil the plans for AMC to nearly 40,000 attendees at the Performance Racing Industry (PRI) Trade Show.

The PRI Show is one of the largest in the world for the automotive and motorcycle racing industry. This year’s show featured new lines in racing products, machining equipment, motorsports engineering solutions and more from the 1,000 motorsports companies in attendance at the three-day show. The PRI show is also a popular destination for international companies and racers, with more than 65 countries in attendance this year.

Star Racing representatives gained valuable contacts and support for the future Americus Motorsports Complex through their AMC-themed booth at the PRI show from Dec. 1-3. Informational packages were distributed to major players in the motorsports industry who were interested in knowing more about the facility. The Star Racing team focused on promoting not only the potential of AMC, but also the business-friendly attitude and entrepreneurial spirit of Americus and Sumter County.

“I’ve had so many industry people tell me that they’re looking for a reason to move south, and I want AMC to give them that reason,” George Bryce, Star Racing co-owner, said. “We know we’ve got a great community here in Americus, and we just want to let others know that they can be a part of it.”

Also while in Orlando, Jackie attended the Professional Motorsports Circuit Owners & Operators Convention, hosted by PRI prior to the trade show. This two-day event, geared toward race track owners, investors and operators, covered every aspect of motorsports facilities, from initial development of new and existing facilities to the technical aspects like paving, lighting and more. Through this opportunity, Jackie attended a number of informative seminars and made valuable contacts within the industry.

Chris Matheson wind Round No. 2 of Australian Championship

Is the First Five-Second Motorcycle Finished?