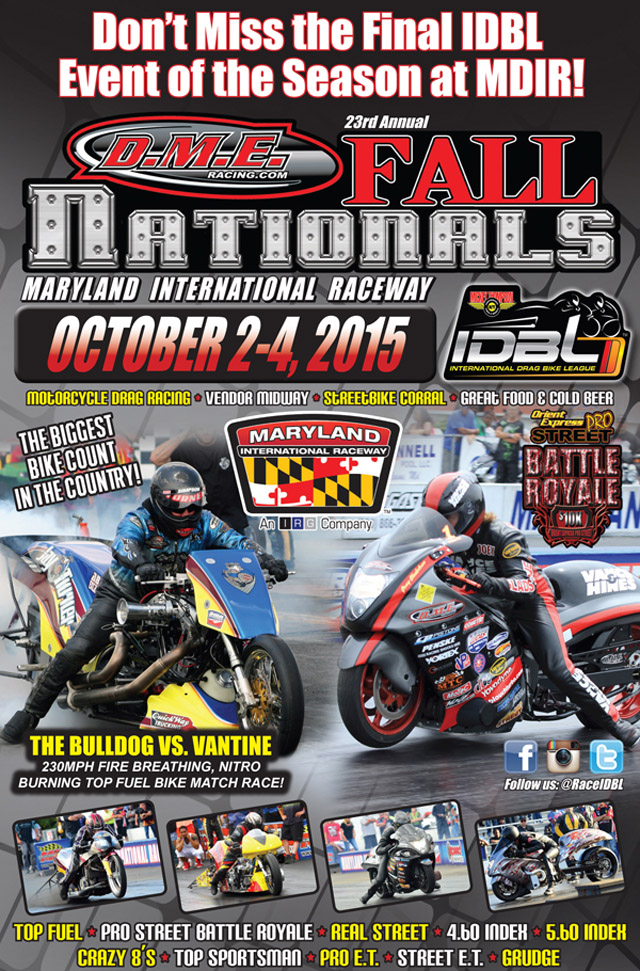 The Orient Express Pro Street Battle Royale is not only the highlight of the ultimate high-horsepower streetbike calendar, it might also be the deciding factor in this year’s IDBL points race. Suzuki Hayabusas, GS1100s and GSXR1000s, and Kawasaki ZX14—all fitted with turbos, superchargers or nitrous oxide—will assault the world’s best street tire-prepped quarter mile for money and glory. 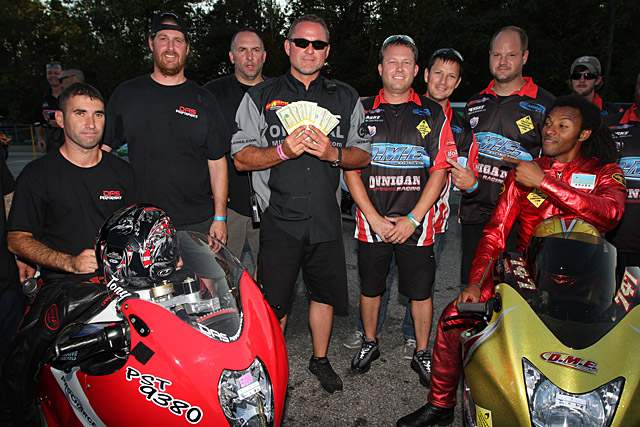 Larry “Spiderman” McBride will have to sit out this final Top Fuel match race of the year as he continues to recuperate from third degree burns following his huge finishline explosion and fire at the recent Orient Express Motorcycle U.S. Nationals at Atco Dragway.

IHRA Nitro Harley superstar Jay “Bulldog” Turner has stepped in to replace McBride and take on David Vantine and the Pollard Nitrosports bike. In spite of running “no blower and two less cylinders,” you can expect Turner and his well dialed-in, thundering Harley to do their best to whip Vantine’s supercharged, inline 4 cylinder import. The pressure of two warring cultures is on in this timeless battle—who will win?

Turbo vs. nitrous is another timeless battle, and when you throw in all-motor, you have the diverse class that is DME racing Real Street. Gladstone took the Atco win on DME’s all-motor ‘Busa over the turbo Kawasaki ZX14 of Atco hero Rickey Gadson—the first time ever that a Real Street race was won without a power-adder. Meanwhile, Anibal “Cannibal” Merced quietly took over the Real Street points lead on his NOS ZX14.

But the Real Street battle will get even thicker as multi-time champ Jeremy Teasley and his RS Motorsports team boss Roger Starrette are expected to return to MDIR with their trailer full of nitrous huffing ZX14s and lay claim to what they see as a birthright—another season title for Teasley.

Tyler Cammock holds the Vance & Hines 4.60 points lead, but Mac McAdams is close behind and Bobby Lovingood is right behind McAdams. Cammock is a quiet guy and McAdams—not so much. Will Mac try and get in Tyler’s head under the MDIR staging tent?

Defending FBR Shop 5.60 champion Michael Ostrowski once again carries a points lead into the final round. But second place is tied between Dustin “Tennessee” Lee and Shayne Proctor, and they would love nothing better than to see their streetbikes prevail over Ostrowski’s dragbike at season’s end.

Ben “Hardest Working Man in MC Drag Racing” Knight has a commanding Carpenter Racing Crazy 8s lead, but rivals Lee, Robert Parker and Spencer Claycomb are not giving up yet.

The tightest championship race of all is in Trac King Clutches Top Sportsman, where Brian Canoles and Andre Jones are tied for first, with Dave Clinedinst and Bobby Holland within striking distance.

IDBL President/Promoter Jason Miller looks forward to welcoming all racers and fans to this mega event at the world’s greatest motorcycle drag racing facility. This one is the BIG one and you can’t miss it.