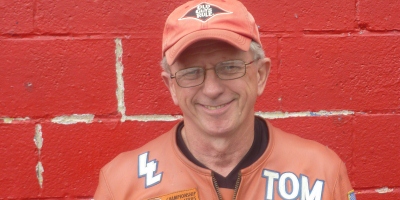 After winning  the AHDRA Pro Stock race at Rockingham Dragway, Tom Caldwell returned to Knoxville and  prepped his  121” S&S based Sportster AHDRA Buell Pro Stocker. But His crew member had a prior commitment  and his backup person also has a conflict.  Running a Pro class machine mandates getting there to race so Caldwell left home and went to AHDRA Ohio Bike Week Nationals with no crew/help.  However, after minimal haggling Caldwell “borrowed” Va. John from OJ Marinelli and Pee Wee’s crew to help.  Thank you Va. John!

It was a great weekend for Caldwell. He was #1 qualifier out of the box at 8.31. The track was green and the front half numbers were say, lousy!  The 2nd qualifying pass was a test & tune pass, trying a new shift system and it still needs some more refining.  Qualifying session #3 netted another personal best of 8.10 @ 161 mph in the mid 90+ heat, staying #1 qualifier!

After a couple rounds of eliminations, it was OJ Marinelli (remember the part about VA. John) in the final looking over at Caldwell. Caldwell won the race with another personal best of 8.086 @ 163. 29. I’m thinking Tom owes Pee Wee and crew a nice dinner.

Steve Allstaedt, who does head porting for Caldwell as well as several other QUICK and Fast Gas Bikes said, it was the fastest pass ever with with a conventional S&S rocker arm valve train..
After this win Caldwell is  # 2 in points in AHDRA Pro Stock.

Then, on the way home, Caldwell blew a left drive tire on the Clays Ferry bridge in Ky., you know the one the it’s like 500+ feet high! His truck hit the right retaining wall, broke a tie rod, jack knifed the rig, went sliding down the inside retaining wall, Tom was looking at the trailer thru his driver’s door window, the trailer slid down the side of the truck (otherwise it would have been fine no real damage) came to rest looking head on into traffic and stopped 75 feet ahead of Caldwell and the truck.
Some how no SEMI’s hit him, NO cars were hit by him and no one was hurt. It was a miracle!.
The truck is totaled and smashed the left side of his trailer!

“I am fine– just bruises and a bump on the head. the bike and trailer contents are “OK”. All’s well that mostly ends well with no major injuries.
With the help of a friend Caldwell and the trailer arrived  back to Knoxville and though bumped and bruised is proceeding to prep for the AMRA race in Bowling Green, Ky. on 6/23&24/12.