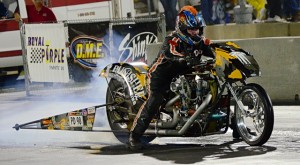 The Pro Dragster class continues to grow in popularity.

The Australian National Drag Racing Association (ANDRA) announced this week they will add a carbureted Nitro bike class to their line up beginning with the 2014 season. This new class will be called “Nitro Bike” which will run under the same rules as Pro Dragster in the USA.

Formally, ANDRA had one fuel bike class which was called Top Bike Eliminator and contained both twins and metric bikes in the same class. ANDRA has now renamed this class to “Top Fuel Motorcycle/M or /T”.

“This is great news for our sport and Australia in particular, says Johnny Vickers of Hawaya Racing. This all came about when Gordon Crawford and Les Holden attended the Nitro Bike School in 2011. We had built Gordon a new T/F Harley, as he was switching classes from the Top Gas class to Top Bike in the ANDRA. During that time, we discussed the fact that the Nitro Bikes were on the decline in Australia as they had been here in the USA and how the school and the reliability of the Pro Dragsters were getting new blood into the sport. We discussed the possibility of doing the same in the ANDRA, so we made a plan. Les Holden did a formal proposal and submitted it to the board members of ANDRA for approval. In January of this year, Leanne and I made the long trip to Perth, Australia to assist Gordon and his crew in getting his new bike up to speed. Gordon took this opportunity to set up a meeting with the ANDRA officials during their monthly board meeting. Leanne and I did the presentation to the board members showing video from some of our events in the US. We pointed out the fact that the bikes always go down the track and present close and exciting racing. We also presented cost analysis of obtaining and operating the Pro Drag style bikes. After the meeting, I had several follow up conversations with ANDRA Divisional Tech Director Terry Jongen, as he wanted more detailed information to better present the class addition to the national board members. This summer at the ANDRA national board meeting, the proposal was passed and now Australia has a new Nitro Bike class. This took a team effort from Les, Gordon, Terry Jongen and us here at HRP to make it happen. We are all very excited about the news and look forward to that class getting up to speed down under.”

Vickers Two for Two in NHRA