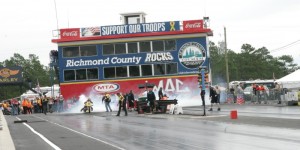 Earwood said, “The AHDRA had sanctioned a fall race at The Rock for 25 years and it has been the Jim McClure Nitro Nationals for over a decade and that relationship won’t end with the demise of the AHDRA.  Although we’re saddened by AHDRA’s plight, we’re lucky that the show will go on.   It didn’t take much time for American Motorcycle Racing Association President Marty Vandenheuvel to step in to keep that great Nitro Harley Thunder at the Rock.”

“Rockingham Dragway has a rich history with Harley-Davidson and Harley racers,” Earwood said, “and  we look forward to many more years of success with Marty and Jayne.”

The AMRA event will feature the ever popular ground pounding, ear splitting Top Fuel and Pro Fuel classes as well as the fastest Pro Gas and Pro Mod classes. As always there’s a variety of sportsman titles designed for the “run what you brung” teams.

Earwood’s mantra resonates– different logo, same great race. Because in addition to the AMRA Jim McClure Nitro Nationals , he’s pleased to  announced that the Johnny Vickers Hawaya Racing Nitro Riding School will hold classes at Rockingham in advance of the race.  If you’ve ever even considered being a Nitro Hero, following in the burnout of the greats at Rockingham, contact Earwood or Vickers and see what the rush, the noise and the thrill is all about.