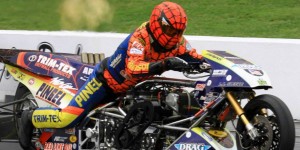 Not only will McBride propel his record-setting, nitro machine down the quarter-mile on consecutive weekends, he won’t even get a chance to stop home in between.

McBride will be featured at the illustrious Summit Motorsports Park Night Under Fire from Norwalk, Ohio, on Aug. 1oth, and afterwards, he will drive straight to Indianapolis for the Man Cup/NHDRO Pingel Thunder Nationals Aug. 16-18.

“With fuel prices being so high, it just doesn’t make sense for Steve (McBride) and I to drive home from Ohio and turn around and start driving to Indianapolis a couple days later,” said McBride, who is based out of Newport News, Va.

“Bill Bader and everyone at Summit Motorsports Park put on such an amazing event.  I’ve been racing for years and I have never seen anything quite like it. It’s pure entertainment. It has something for everyone,” McBride said.  “They make us feel like rock stars.  I end up spending most of the weekend signing autographs because there are so many fans in attendance.”

McBride will then head towards Indianapolis to spend a couple days with his sponsor Vance & Hines, who has an elaborate race shop in Brownsburg, Ind.

“I have so many friends at Vance & Hines.  It will be nice to stop and visit for a while.  They have been so good to me over the years,” McBride said. “We will also service the bike there.”

Plus McBride will have to opportunity to discuss how to make even more power with one of dragbike racing’s most accomplished and respected motor builders, Byron Hines.

“This will be a golden opportunity to bounce some things off Byron. He’s a genius.  We think we can make some more power in the head and cams,” McBride said.

From there, McBride will enter a full weekend of racing at the Pingel Thunder Nationals, Spiderman’s first trip to Lucas Oil Raceway since 2009.  McBride will qualify once on Friday night, twice on Saturday and will look to build on his Man Cup points lead in Sunday’s eliminations.

“It’s been a while since I had to prepare for two events so close together but we can handle it.  We will be bringing a trailer full of motors,” McBride said.  “It’s exciting.  We will get to run on two of the top tracks in the country, see a ton of old friends and have some fun.”

Of course McBride wouldn’t mind setting a record, or two, along the way.