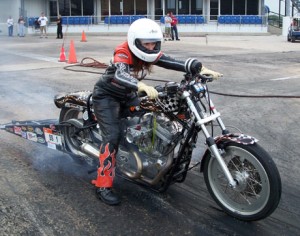 Following her victory at AHDRA’s Gypsy Redezvous Nationals in St. Louis, Julia Holliday looked like she was back into championship form for the 2007 season. The North Springfield, PA resident is defending her back to back Super Sport championships in 2005 and 2006. “The competition in Super Sport is tougher than ever this year,” says Julia. “Just when I think I’m getting back in the groove, I lose another close one. I think this season is going down to the wire. Only this year there are seven racers within 111 points at the top. We are only half way through the season so it is anybody’s championship.”

Julia began the season sporting a fresh engine built and designed by Dan Umstead of D&S Performance of Lake City, PA. The 88ci Sportster features the all new D&S High-Performance Heads. “After running Dan’s last set of heads for four seasons, I was thrilled to get one of the first sets of his newest heads,” says Blake, Julia’s husband, tuner, and teammate on their team Can’t Stop Racing. “We won two championships with the last engine Dan put together for us and never had to do more than routine maintenance for those two years. This engine is even stronger. I think that’s been part of Julia’s slow start this season but once she gets a handle on this bike’s power, she should be lethal.”

Close finishes are nothing new for Julia. Last year the championship was decided at the last race in Las Vegas. She was in a dead heat with Ohio racer Larry Maynhart with the title going to the racer who went the most rounds. Larry went out first and Julia captured her second consecutive championship. “I guess I just like it close,” says Julia. “Even my first championship went down to Vegas. It drives Blake and I nuts. Guess that’s why we just Can’t Stop Racing.”

“I am also grateful for the opportunity to race a Destroyer again this year for John Wise and Team Nila,” adds Julia. “I just can’t wait to get our Destroyer sorted out so I can be a threat in this class too. We love drag racing and couldn’t do it without the support we have had from our perennial sponsors like D&S, Barnett Clutches, S&S, and Harley-Davidson of Erie, PA.”