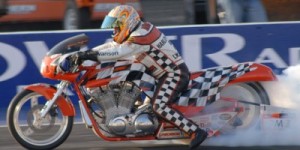 The AHDRA is geared up and ready to rock fans with a powerful show at Bristol Dragway, August 6th and 7th, with Nitro Harleys “Racing Under The Lights”.

With the arrival of the mid-season mark in AHDRA’s Sceamin’ Eagle Championship Series, the competition is expected to be stronger than ever at the Thunder in the Valley Nationals.  AHDRA plans to give fans plenty of 2-wheel excitement at this year’s event with the top guns of the sport battling it out on the quarter mile strip.

In addition to the racing action, a huge array of vendors including Rush Racing Products will be on site at Bristol Dragway, along with the AHDRA Merchandise Trailer. Rush Racing Products proudly sponsors Pro Fuel, Pro Gas and Super Eliminator.  In addition, the famous T-Shirt cannon will be there firing out free AHDRA and AHDRA Racer’s t-shirts into the grandstands.

Black Wolf Harley Davidson will host the second AHDRA Nitro Party (1061 Old Abingdon Hwy., Bristol, VA) on Thursday, August 4th, from 4pm – 9pm.  Race fans can meet the racers and get a peek at their nitro-burning machines.  On hand will be AHDRA Racers Ray Price, Greg Grove, Pete Stimeling and Jay Beasley.  There will be food, drinks, games, giveaways, music by the Benny Wilson Band and the Wolf Pack Girls.

Gates open Friday, August 5th at noon with Test & Tune from 4pm -8pm, followed by live music at the track featuring The Peace Pipe Band. Racing action gets underway on Saturday, August 6th with sportsman classes qualifying at 3:00pm and pro classes begin qualifying at 5:00pm – Nitro Harleys At Night – Racing Under the Lights!  On Sunday, racing begins at 12:00 noon after Opening Ceremonies.

Admission to the Thunder in the Valley Nationals is $50 for the weekend and $30 for single-day admission.  H.O.G. members receive a $5 discount at the gate. Official H.O.G. Pit Stop – free pin and water with valid H.O.G. card and paid admission. Children 11 and under are admitted free and free admission is offered to active and reserve military personnel with proper identification.  Discount tickets are available at Colboch Harley Davidson in Morristown, TN – Smith Brothers Harley Davidson in Johnson City, TN and Black Wolf Harley Davidson in Bristol, VA.

Weekend camping is available at Bristol Dragway beginning on Friday, August 5th.  Campsites are $25 per tent site and $100 per RV site.