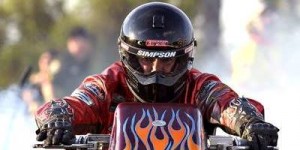 The fifth annual Good Vibrations Motorsports Southwestern Nationals presented by Budweiser – featuring the fastest cars and the biggest stars in the sport of drag racing – will take place on Friday and Saturday. Gates will open both days at 9 a.m. The Nitro Jam (Nitro Funny Cars, CIFCA Funny Cars, Pro Stocks, Nitro Harleys and Jet Cars) will start at 4 p.m. each day. Tickets are $25 for adults on Friday and $30 on Saturday. Kids tickets are $10 each day. Fans may save $5 by purchasing their tickets in advance at www.nitrojam.com.

The annual IHRA Nitro Jam season-opener continues to grow. This year’s Good Vibrations Motorsports Southwestern Nationals presented by Budweiser will feature the largest fields in the history of the event as the stars of the AMSOIL Nitro Funny Car, U.S. Bounty Hunters Pro Stock, Nitro Harley and Jet Dragster classes will converge on southern Arizona.
Southwestern International Raceway is expecting a large field of AMSOIL Nitro Funny Cars and California Independent Funny Car Association (CIFCA) entries. At least 20 of the best nostalgia racers in the country will burn up the quarter-mile drag strip at speeds in excess of 260 miles per hour.
Among the Nitro Funny Car stars expected in Tucson are the top five drivers from the 2014 IHRA championship standings, including defending IHRA champion Jason Rupert in the Bays & Rupert Black Plague Camaro. Other drivers scheduled to compete include “Mr. Explosive” Mark Sanders, Mike “McAttack” McIntire and Tim Boychuk in the “Forever Forward” Pontiac.

The Nitro Jam event also will feature the U.S. Bounty Hunters Pro Stocks (including defending champion Cary Goforth), Nitro Harleys and Jet Dragsters.
The IHRA pit experience allows fans to tour the pit area, meet the drivers and take part in a number of fun family activities, including the Larsen Motorsports Jet Technology Center. A special attraction this year is the renowned Hollywood Cars of the Stars collection from the Miami Auto Museum at the Dezer Collection. The exhibit will include famous television and motion picture cars including the TV Batmobile from 1966, the General Lee Dodge Charger from the Dukes of Hazzard TV series and the DeLorean time machine from the 1985 cinema hit, Back to the Future.

Capone Ready to Step Up to Top Fuel