Victory Motorcycles Returns to Partner with Matt Smith Racing for 2017

Victory Motorcycles, a division of Polaris Industries Inc., represents the first all-new American-made motorcycle from a major corporation in nearly 60 years, and is rapidly making impressive gains in the cruiser and touring motorcycle marketplace.

Victory joined the NHRA in 2015 with Smith and has been running a two-motorcycle team for the last two years, with Smith’s wife Angie also racing a Victory Gunner.

“It means a lot to me that Victory is coming back,” Matt Smith said. “We’ve been developing a new motor for the last several months, and we’re doing new bodywork for the 2017 season. We should be even better next year.”

Matt Smith has made the Countdown to the Championship in each of the last two years aboard a Victory machine. He has two No. 1 qualifiers and has one win in four final-round appearances while developing the new Gunner engine/chassis/body combination.

“The partnership has been good,” Smith said. “We’ve struggled some. We all know we’ve had an aerodynamic disadvantage for the last two years, but we’re moving in the right direction to try and make the bike more aerodynamic with the new body we’re going to come out with. Hopefully, that will give us the edge we need to put Victory in the winner’s circle on a regular basis. 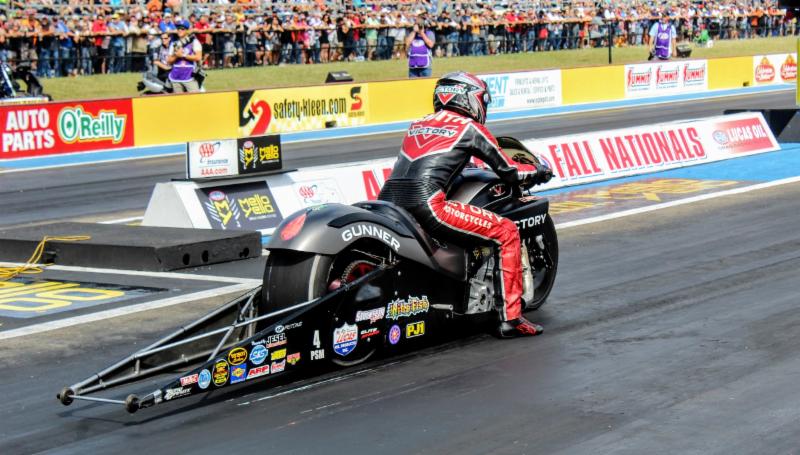 “Closing out 2016 with a big victory for Victory at the last race of the year really gives us a bunch of positive momentum heading into the off season. There’s a lot of work to be done and the Gatornationals will be here (in mid March) before you know it but we’re all extra energized now with this latest Wally trophy on the mantle.”