The International Drag Bike League (IDBL) announced today the 2017 season schedule. The 2017 tour will include five events with four taking place at its flagship location, Maryland International Raceway (MDIR), and the addition of a race at Rockingham Dragway.

“We listened to a lot of feedback from competitors, fans and sponsors and wanted to put out the best possible schedule based on what we felt the IDBL community wanted,” IDBL President Jack Korpela said. “I’m really appreciative of the strong support from IDBL racers in 2016. We battled some adversity and every event was affected by weather. To still have such a strong bike count and such competitive championship chases shows how much this series means to all the loyal racers who have been following it for years. I fell in love with this series the first time I announced a race in 2002. We respect all the great individuals who have helped paved the way and we want to keep the momentum going.”

The IDBL will continue to use its traditional MDIR dates, with some events having more than a 20-year history. The season begins with a late-April and late-May showdown, followed by a two month break to prepare for the IDBL’s biggest race of the year, the action-packed, illustrious WPGC Bike Fest July 28-30, featuring live music, Top Fuel, a stunt show, a bikini contest and more.

The most notable change in the schedule is the addition of a World Finals at Steve Earwood’s Rockingham Dragway the first weekend of November. Prior to becoming known as the IDBL, the series was known as MIROCK, with a season split between MDIR and The Rock. It was a wildly popular and successful.

“Two things I heard continually when asking for feedback from the racers are, “I don’t want too much travel and I don’t want another warm-weather race” I feel a move to The Rock in cool, horsepower-making November air satisfies both of those requests,” Korpela said. “Rockingham in November was once the biggest race of the year. We want to recreate that.”

“We are thrilled to be back with Maryland International Dragway and with the IDBL to continue the motorcycle racing tradition that was first established here back in the glory days of the MIRock series,” stated Steve Earwood, owner of Rockingham Dragway. “We are committed to restore the lost luster and the glory days of bike drag racing and sincerely feel the IDBL, under the auspices of Chris Lencheski and his lieutenants, will once again bring bike racing to the forefront.”

“The addition of an event at Rockingham combined with our string of events at MDIR is the latest in our ongoing efforts to bring more value to our partners,” stated Shawn Hackman, CRO at IRG Sports + Entertainment. “The IDBL is a valuable platform for manufacturers and sponsors looking for exposure and a partnership in the performance bike category.”

The fourth and final race at MDIR will conclude with the Fall Nationals, featuring a $10,000-to win Pro Street Battle Royale, October 6-8. 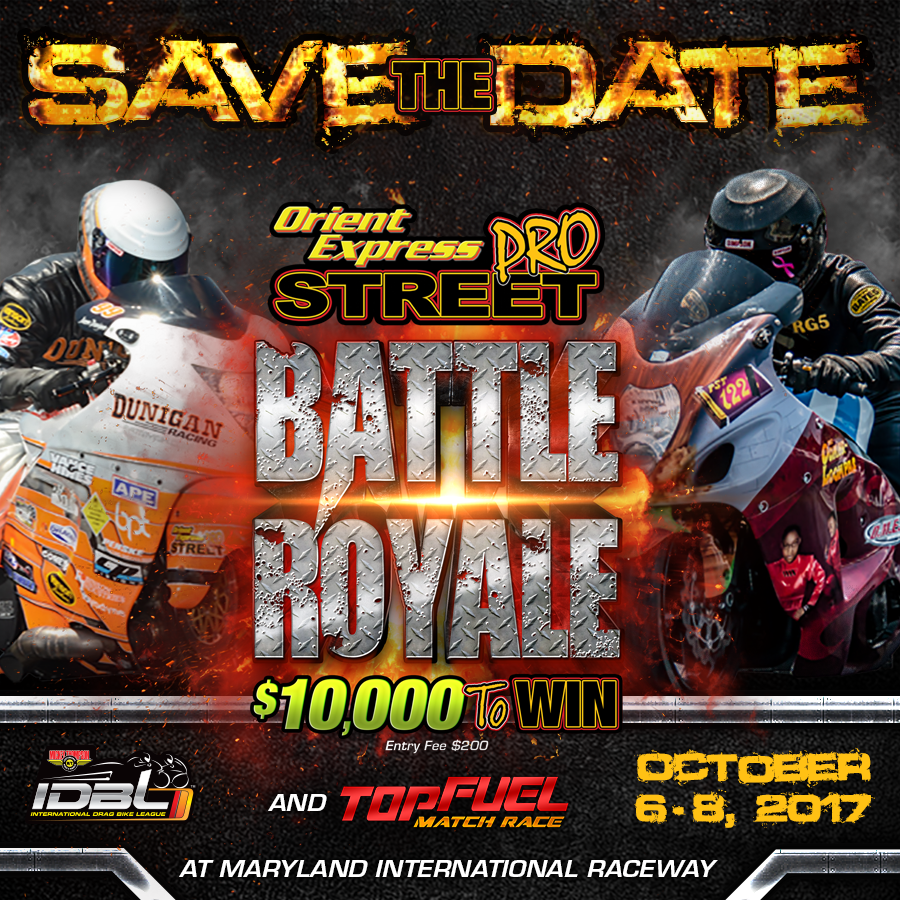 “Last year we battled through a hurricane and still had an amazing race,” Korpela said. “The Battle Royale has become one of the most exciting attractions in all of dragbike racing and we need to keep it going. Showcasing the world’s quickest street bikes is also something everyone enjoys greatly. Everyone loves the cool, crisp October air at Budds Creek.”

Also new to the IDBL in 2017 is the addition of the Top Fuel Championship Series. The two-race series will be run at the July 29 – 30 and October 6 – 8 events at Maryland International Raceway. A Top Fuel import and a Harley champion will be crowned at the final race. Additional information regarding the new series will be announced in the foreseeable future. 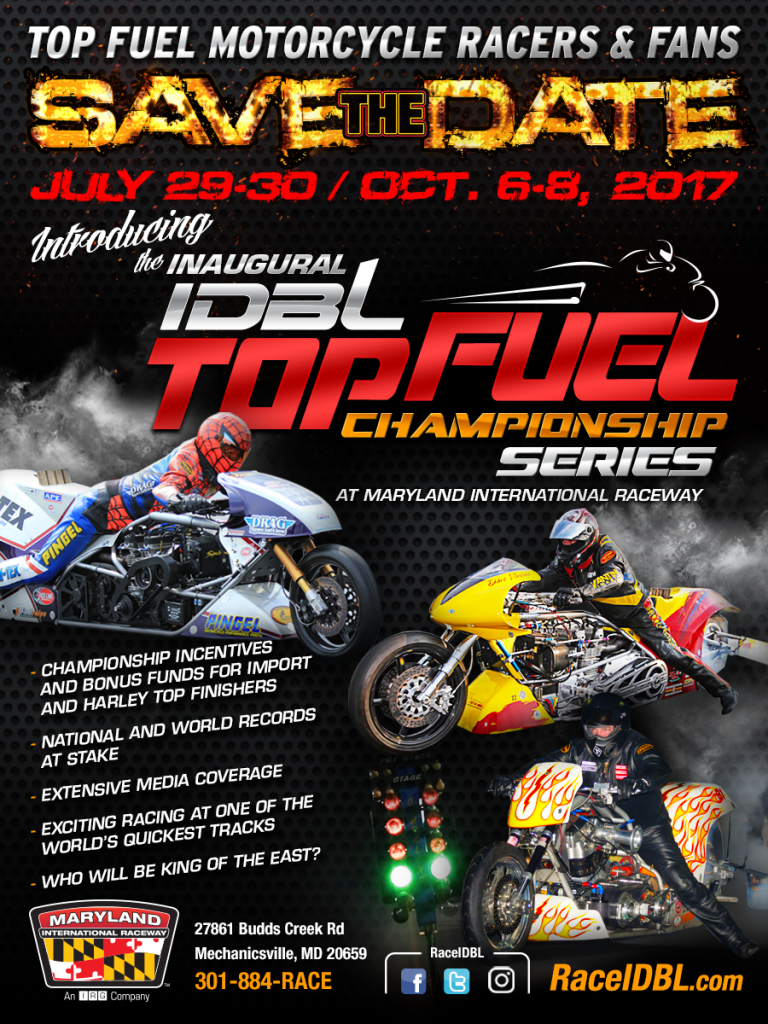 For more information and to stay connected to the IDBL, please go to www.RaceIDBL.com or follow us on social media – Facebook.com/RaceIDBL or @RaceIDBL on Twitter and Instagram.

Victory Motorcycles Returns to Partner with Matt Smith Racing for 2017