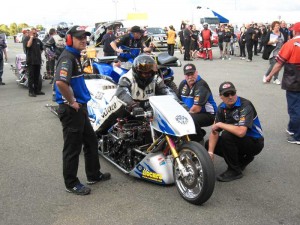 The Nitro Voodoo Team made the long trek across Australia to the Perth Motorplex to compete in the second round of the Pro-Series Championship.

The Perth Rounds carry 50 percent bonus points and can provide the opportunity for competitors to accumulate substantial points.

Rider Chris Matheson said, “the team had raced three times in Perth, resulting in two runner ups in the Pro-Series and a win in the non-championship meet known as the Red Line Oil Challenge”.

The recent meeting held on 3-4 December 2010, allowed the Team to Test the week before to feel out the track and obtain critical track data.

Wednesday’s Test day saw the Nitro Voodoo Team run a 6.1 In the first pass and a 6.3 In the second.  The Team had fitted a chute to the bike in anticipation of running big speeds, chasing the illusive five second pass.

Both shake down passes were plagued by buffeting cross winds, which almost saw Matheson hit the wall after a gust of wind blew the bike into the wall at over 200 mph.  Matheson recovered to survive the encounter with Team members gasping at the near miss from the start line.

The test day soon wrapped up with servicing of the bike, the number one priority in readiness for the Friday’s qualifying session.

The Meeting was shaping up to be a big one, with some 14 Top Bike entries, excellent conditions and the Nitro Harley Teams running consistently fast mid six second runs.

The pressure was on as it always is as current Australian Champ, all sites are on the Nitro Voodoo Team to knock out the Champ.

The No.1 plate attracts plenty of attention as everyone wants to beat the champ.  After finishing the preparation of the bike on Thursday, all was ready for Friday’s qualifying.

Qualifier one saw a 6.126 sec pass, which set the scene for a competitive meet, with the rest of the field chasing combo’s to get down the track.

Cross winds at half track made steering the bike extremely challenging, particularly when you are on one wheel.

Qualifying two was disappointing as we spun the tyre out around half track and only managed a 6.577 pass.

Crew Chief Roger Bloor decided to change a cylinder head valve between the second and third qualifier and chose not to come out in the third session.  The 6.126 off the back of the truck was shaping up to be the pass to beat, as fellow competitors struggled with track conditions.

Saturday saw the Nitro Voodoo Team collect a Medallion for Top Qualifier and lining up to race new comer Terry Burnett in the first of the eliminations.

Directly after the formal opening of the meeting, we fired up and moved into the burnout area.  After a strong burnout, we quickly moved into Stage to take on Burnett, who had recently purchased his bike, a former BSR Nitro Harley.  Burnett was an experienced rider, after racing in the lower ranks, proving himself as a tough competitor.

Matheson launched out of the staging pad, carrying the front wheel and continuing to wheel stand as the bike hooked up into second gear.  At more than 210 mph Matheson was hit by a strong gust of wind, blowing him across the track past the finish line into Burnett’s lane.  After regaining control, Matheson tried to move out of Burnett’s way, knowing he would be bearing down at great speed. 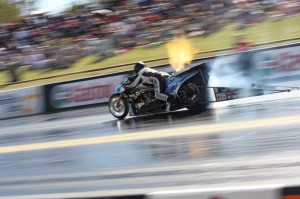 Burnett glanced Matheson on the left side, taking off his foot peg, thundering past at great speed.  Fortunately, neither Rider were injured and both bikes stopped safely in the shut down zone at the end of the track.

Burnett offered his pegs after the race, so we could meet Kim Stevens in the semi.

Matheson ran a 6.319 to eliminate Burnett with a 7.104.  Matheson praised Burnett’s efforts to qualify and run so well in his first Top Bike Meeting.  Matheson went on to say that Burnett has a proven bike from a good stable and will be one to watch over the season, as his experience comes with each pass.

The semi was going to be a top race, as Steven’s knocked out Phil Parker in his elimination to reach the semi-final.  Kim had been punching out consistent mid six second passes in the lead up to the meeting and had always been a lightning bolt on the tree.

Matheson knew he was in a race when Steven’s fired the bike in a nearby pit, sending thunder like shock waves throughout the pits.

After a strong burnout, Matheson launched hard and passed the finish line ahead of Stevens to move through to the final.  Matheson ran a 6.309 versus Stevens’ 7.697.

The final saw Matheson up against former Champ Troy McLean riding a monster new Harley, recently imported from Canada.  McLean had been consistent all weekend and had success many times before, when competing in Perth.

Both Riders were in the Staging Lanes well before the race, only to see a down poor halt proceedings at the fire up.

Both Teams left the Staging areas thinking the night was over, only to be advised that the track had been dried and the last few finals would be run before the track’s 11pm curfew.

Unfortunately Matheson didn’t get to the bike in the start up area in time and McLean had a bye, taking out the Golden States title.
Matheson said he was disappointed not to run, especially for the people who stayed on after the rain.  Full credit to Troy for a deserved win after showing excellent performance and consistency over the two days.

Matheson said the Team was keen to get to Round 3 at the “Plex” and hoped the cross wind was a little less gusty so we could try to lay down a solid pass.

Matheson also praised the efforts of WA Nitro Harley Rider Mark Drew running two 6.4 second passes, beating the Australian V-Twin Record.  He also congratulated Wayne Barrett for qualifying on his new Nitro Harley and an awesome display of courage from Marc Ryder in only his first meeting, qualifying, then taking out Jay Upton in the first elimination.  Well done.
Matheson also said he is happy to see Phil Parker run a PB of 7.108 on the Parker Racing Bike, underlying the fact that the Team has the ability to run competitive passes despite their recent challenges with reliability.

Points Table is as follows;