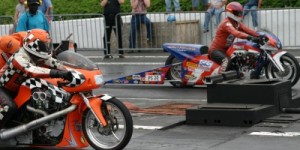 After another win, Tom sits13 points out of 1ST place in theAHDRA Pro Stock division,and 2nd in theAMRA Pro Gas class Caldwell says, “I am really considering retirement at the end of the season, but man, what a year it’s been, everything is coming together for my program. New sponsors, the bike’s really fully prepared to complete the season and with really minimal work through the winter(STEVE & I HAVE A COUPLE OF NEW IDEAS FOR NEXT YEAR), we could be ready for the 2013 season. WHAT a decision. My body is starting to say ‘give it up’, my heart says ‘are you CRAZY?, let’s race’!

After some 45 years of competing in several venues, it is a way of life. Especially, since my dad raced flat track Harleys when I was born!

It’s the time of year for big decisions across the sanction, but there are 2 more AHDRA events, 1 moreAMRArace and multiple personal appearances.

I wish to thank Vreeland’s Harley-Davidson for their sponsoring of the race, friendship and support of our organization.

I also, want to thank Bill Rowe for supplying the VP gas, we need at the events!

Not too shabby for the “Old Guys Do Rule Racing Team”

(AFTER RECENT MEETING, HOPE SOON TO ANNOUNCE ANOTHER)

& MANY PEOPLE THROUGH OUT THE YEARS