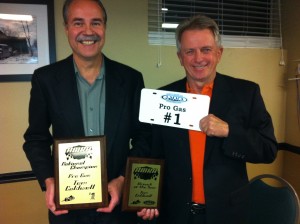 Tom Caldwell of OLD GUYS DO RULE RACING is retiring from ownership of his Pro Gas Harley-Davidson dragbike program. After racing for some 50 years and Pro Gas/Pro Stock Harleys for the last 28 years, including winning 4 National Championships, the last two of them back to back and being chosen the AMRA 2013 Wrench of the Year, Caldwell’s AMRA Championship bike has been sold. Caldwell will be the Maintaining/Tuning and Technical adviser for the new owner.

This is a radical new chapter for Tom as he has lived life ¼ mile at a time for many years.

Caldwell says, “It will be different watching the bike go down the track with someone else on it permanently but I’ll still will have some skin in the game. We will be testing and will kick off the 2013 season with the AMRA Cajun Blowout, March 29th-30th.

Caldwell, a prime example of an owner/rider/tuner, has worked diligently for many years, running out of his own pocket, like most of the Harley racers. This was all done to attain the winning performance he and his team have enjoyed in 2012 and 2013 winning 10 races, 12 – #1 qualifier positions, and 15 records set in the last two years. 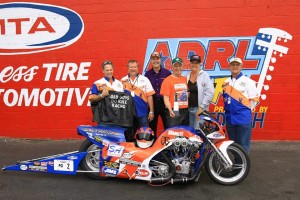 Caldwell says, “The only races I lost in the last two years were the rider’s fault, and not the bikes.”

“What can I say about my collaboration with Steve Allstaedt of SA RACING? He is instrumental in my obtaining these goals. My only wish is that I had met him sooner! Steve and I will still be working together with the new team owner/rider.”

“To have been the 5th person to run a 7 second pass in AHDRA 120” trim, is one of my most cherished achievements as, only a few have done this. I have raced with so many great people like Simon, Reno, OJ, Junior, Rat, Capone, Thompson, KW, Suber, Hollenbeck, Raudenbush, Beltiamini, Krenik, Maney, Sternotti, E. Lee, Pouge, McNally, Bradford, Mattiolli, Korn, Fitzmaurice, Feazell, Landolina, Hannum, Tommy Sloan, Departure Bike Works and so, so many others.”

“It has been a privilege to have met so many fans and other competitors all over the world who love to hear a V-Twin roar down the track, and I’ll never forget the exhibition runs at the Mosten Race Day event in Denmark in 1995.”

“To go out on top makes this somewhat more palatable. Running and winning over Andy Simon,who has won several National Championships himself, and setting a new ET record of 7.916 in the “FINAL” run of my career and resetting my records was the way to go out! But, Simon has not hung his helmet up quite yet! And not truly wanting to never say never, if an opportunity opens itself up and works for me; you could see the OLD man still doing his thing!”

“I have raced something for 50 years but, it is time. It will not be easy to not feel the acceleration and to shift my bike into high gear and sail through the traps! To achieve what so many desire and strive for is a privilege, a hard earned one.”

But, the OLD MAN is HAPPY!

I have so many people over the years to thank for their friendship and support, below are a few:

The Birth of the “Modern Era” Top Fuel Motorcycle