Thru the Hayes – Oh Calcutta! 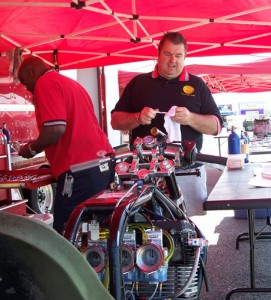 Murdoch Racing Enterprises (MRE) owner Jimmy “Hayes” Regan is back in print again with his popular column “Thru the Hayes” originally made popular in the now defunct Prostar report in the early nineties. Regan is a devout supporter of motorcycle drag racing, a Pro Mod team owner, and as a former Pro Comp standout, a formidable two wheel racer himself.

Ron Valetti met me for lunch sometime after the Atlanta event to, as he said, “pick my brain” about how to improve Prostar. In my opinion, we had a great discussion and Ron seemed genuinely interested in the suggestions I offered. At some point I turned the tables on him and asked him what Prostar had in the pipeline to improve Prostar itself. Ron fired off a laundry list of already planned improvements which impressed me to no end. In addition to the improvements, he talked of some “fun” things planned as well. Pre-race promotions, fan giveaways, ticket offerings as well as a “Calcutta” were planned.

A Calcutta? What in the Sam Hell is a Calcutta I asked? Ron, who doesn’t really know me, but obviously has been filled in at least to some extent of my wilder days by his story telling son, Scott, seemed puzzled that I, of all people, didn’t know what a Calcutta is. I honestly had never, and I mean never, heard of a Calcutta. I guess the shelter of Sin City has protected me from at least a few things out there! Being an acutely compulsive gambler, I quickly grasped the Calcutta concept and wanted to know just when it would be starting up. I was promised a Richmond race debut and I started counting the days.

Well, due to the rain delays and other issues that plagued the Richmond event, time to christen the inaugural Calcutta never presented itself. Time then started to take it’s toll and the Calcutta began to fade off the radar screen.

That all ended sometime late Saturday afternoon of the Columbus event. The call went out to meet in a bleak, dimly lit room under the tower to kick off the Calcutta era. With sincere concerns for my safety and well being, I threw caution to the wind and opted to attend. To my surprise, there was no beer in the offering! Some things just go better in combination rather than solo. Just like cereal needs milk, gambling is just not the same without alcohol. After calling in some reinforcements, I hastily pored over the provided qualifying sheets looking for that proverbial “steal” of the show.

For those of you more sheltered than even I, let me give you a quick overview of just how the Calcutta operates. First and foremost a HUGE portion of the proceeds goes to a registered charity approved by Paul McCartney. Secondly, an almost as HUGE amount of the proceeds goes to the rider himself. Lastly, the winning bidder of the rider gets what little is left over, after taxes of course. The Calcutta begins with the worst qualified rider being auctioned off to the blood sucking vultures occupying the room.

This room happened to be filled with a who’s who of bench racing as well as a few honest folk. The Legion of Doom was well represented by Ronnie Procopio as well as his uncle, Joe Procopio. Also spied in the mix were the team of Ron Love and Coodee Thomas, recently voted most in need of a GPS device after taking the long way from Atlanta to Columbus. A surprise last minute entry was none other than Guy Caputo who was showing immediate effects of corruption due to his parking proximity to the MRE display. I almost had to cry foul due to serious concerns over conflict of interest, but in the end, I didn’t object and let the Head Cheese himself, Scott McKinney participate. Although a late arrival, Ron Clark’s brother made it clear he wanted his brother and wanted him at any cost. Now Ron’s brother is quite an interesting guy, hell, I can’t even remember his name! But, if the stories Ron told Sunday afternoon were true, he sounds like a guy who knows how to have fun! Those stories will have to remain “on hold” , possibly for a future episode, but not until confirmed by the Gunster himself. There were other shady characters of both sexes present, but hell, I can’t be expected to remember everybody!

Enough already, on to the Calcutta itself. Ron Valetti himself was the master of ceremonies and conducted the auction. First up was the lowly number “I don’t even remember” qualifier Rob “Handsome” Hunnicutt. Uncle Joe opened the bidding at 67 cents and I quickly bumped it to one dollar. Unfazed, Joe bumped it to five dollars. Not to be outdone, I showed him who’s boss and bumped it to ten dollars. Joe, with his pride hurt, called it a day, seeing that I was going to get Handsome whatever it took. The rest of the qualifiers went up one at a time, fun was had by all, and when it was all said and done there was somewhere just over a thousand bucks in the kitty. Remember, most of this goes to charity.

In the end, I wound up with Handsome, Ron Clark and the pride of Port Rester – – – I mean Chester, Mimmo the flying Italian. I was talked into selling Ron Clark (for a profit) off to his late arriving brother who’s name I still can’t remember……….

Sundays eliminations arrived and carried whole new meaning to those of us who now owned the title rights to the jockeys of Pro Mod. As things shook out, let’s just say my ten dollar horse brought me a near ten fold return and my runner-upping Italian horse also provided me a good return on my investment. And, none of my horses even won. That honor went to none other than Uncle Joe Procopio who took home the big bucks with the win.

I’d like to personally invite all of you attending the Indy event to show up for the round two of the Calcutta. If you enjoy low stakes gambling and auctions, it’s just as much, if not more fun. And, you don’t have to know anything, luck (can you say Rob Hunnicutt) plays a huge role in it. Even if you don’t want to participate, it may be worth showing up as I’m personally promising a good show.

Until then, wish me luck on my travels with Mr. Peterman to the opium dens of Calcutta in search of gaining some much needed Pro Mod insight prior to Indy!