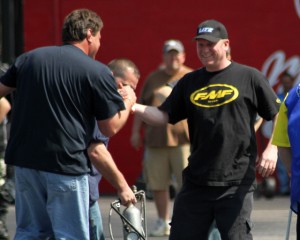 “What can I say, the weekend went very well—better then I planned,” said Jeremy Teasley. The reigning Real Street champion started the 2011 season with a record shattering 7.79 on his very first official pass of the year at the MIRock Superbike Series Spring Bike Open, proving that Teasley and his Adams Performance/Roger Starrette built and tuned Kawasaki ZX14 are once again the combination to beat.

“The bike is basically unchanged from last year,” said team boss Coby Adams. “We’re still running the stock ECU, but we’re making a little more power on motor. Jeremy’s able to run to the 330 on motor alone as fast as we did on nitrous last year.” Continued progress is not good news for the competition as they struggle to catch up with last year’s performance of this multi-time championship winning team.

In addition to more power, the team has even found more durability in their ZX14s. “We didn’t have to change any motors, so that’s a great thing,” noted Teasley. “Roger worked super hard on the Real Street bikes all weekend and all of his work shows with that record setting 7.79 at 190 mph. I can’t thank him enough!” 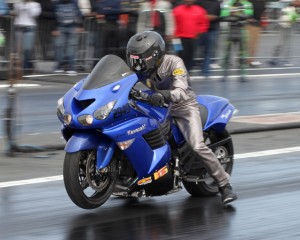 Teasley raced past his teammate Mark Billiter in the semi before squashing the turbocharged Suzuki Hayabusa of Joey Gladstone in the final.

Teasley also rode the lime green, nitrous huffing Pro Street ZX14 to the final round where he fell short to Pro Street record holder Bud Yoder.  “The Pro Street ’14 had some chassis problems that had it going left, but Coby figured that out right before they loaded it to come here.”

“We kinda fell off the face of the earth at the end of last season with that bike,” admitted Adams. “But now we’re back! Like the Real Street bike, we built a little more power into the engine. But we also fixed the rear axle and all our chassis problems went away.”

“Once that was fixed there was a problem in third gear, wanting to pull timing out,” reported Teasley. “But Garron (Adams Performance crew chief Garron Miller) pulled the laptop out and fixed it with some genius tuning. So we won Real Street, runner-upped in Pro Street, and as a bonus got the Real Street record—a great weekend!” 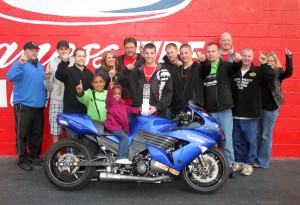 “Now we can figure how to get the Pro Street back in the teens again and beyond,” added Adams, who ran second with his Mini Sprint Car the following weekend at North Carolina’s East Lincoln Speedway. “We put a new Muzzy pipe on the Mini Sprint and it’s definitely stouter than the package we had last year. We were fastest car all weekend but I hit a big hole with 2 laps to go and gave up the lead!”

Adams Performance also builds the motors used by Jammin’ Jimmy Weinert’s AMA/Supercross team. Riders Tyler Bright and Taylor Futrell easily qualified for the Main at the recent Dallas event and are moving up in the standings each and every event.

The Adams Performance/RS Motorsports Team races next at the Fast by Gast Spring Nationals, April 30 – May 1, 2011 at Maryland International Raceway in Budds Creek, MD, USA

See Brock's Performance at the Cup