Swedish Super Twin Bike rider Per Bengtsson has teamed up with the 16-time NHRA Wally winner Tommy Grimes to ride the famous parallel twin “the Beast” during the 2017 season.

Grimes, who made an European debut at the Tierp Arena track in August 2016, despite an unlucky start (DNQ) is very anxious to come back to Europe for some serious racing together with the Beast Dragbike team.

“After some consideration, I think the Beast team would grow in the right direction with myself as a team manager,” says Bengtsson.
“Therefore I´ve been in contact with Tommy and asked him if he had any plans or offers for 2017. The answer was ‘no, I´ve been waiting for you to call!’
I think it was a big boost for the whole team to get the experience to work with a real professional racer like Tommy.”

“The potential in the bike and the team is exactly what I´m looking for,” said Grimes. “The chemistry between the crew and myself was in place after the first day together at the track. It´s not very often you experience that” 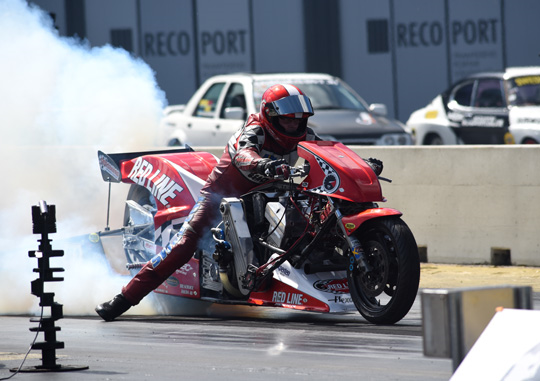 “We already have increased support from some of our existing sponsors and we are working really hard to get new partners onboard for the 2017 Euro/American tour.
The bike will go through several test sessions at Malmö Raceway before the first outing at the Tierp Arena Facility in June. I will do all pre-season tests myself, but Tommy will do a last minute check at Malmö as well,” Bengtsson said. “The plan is to run the whole EDRS Pro Nordic Championship Series the coming season with Tommy as the rider and with the clear ambition to take home the Championship.
We will then send the Beast and equipment with hopefully some more high caliber bike teams over to the US and run the Manufacturers Cup World Finals at Valdosta in November. We thank Wayne and Donna Pingel at Pingel Enterprise for their increased support.”

If you as a racer are interested to participate in the Manufacturers Cup World Finals at Valdosta in November 2017, please contact the Beast team at per@navitaspa.se for more details.
A big thank you to the following partners for their continued support: