Attaining Sponsorship: “Ask for the Order”

So you want to be a racer?  Great. It takes money to do it. Odds are you will never make money racing. Some do make money, but very few. You can work real hard and spend your own money on racing. You might go broke. Then again, you can find someone else to pay for your racing if you work at it. Remember this line…………….”Ask for the Order”.

If you are reading this web site, odds are you are either a racer or involved in racing of some sort. You are involved in one of the most adrenaline pumping, most exciting sports on the planet we live on. Life is short, 100 years from now nobody will care about any of this anyway, so don’t be shy! Live it up! Go for the gusto!!

Because I have been around racing for nearly my entire life, I have dealt with a lot of different parts of the racing industry from time to time. My father first took me to a race at Riverside, California, in 1964. It was a sports car race, I was 4 years old. Then in 1965, after I had turned 5, my father took me to a drag race at Long Beach, California. Ever since those days I have attended a variety of racing events in one capacity or another, on a regular basis. So I do have a few years experience on my side in the racing business.

This past year (2010), a few racers I know contacted me and asked me a question I have been asked many times over the years by many people. Here is the question…………”How do I get a sponsor?” That is where that old line comes in ……………”Ask for the Order”. You would be surprised how many people don’t.

Now I will write this article from a motorcycle point of view, seeing as this is a motorcycle web site, but you can apply this same stuff to car drag racing, oval track car racing, monster truck racing, even airboat racing, etc., if you want to. Yes, there is airboat racing in some locations believe it or not, I’ve announced them before. The same basic principles work on this sponsorship subject, no matter what.

The largest sponsorship I have ever sold was worth $50,000 (dollars) in the end (give or take a few bucks), the smallest I ever sold was for $600 (dollars). There was a lot of stuff I sold that fit in between those numbers. I’ve sold sponsorships to car dealers, theme parks, restaurants, motorcycle shops, and other things. Surprisingly, the bigger dollar deals are often easier to do than the low buck deals. A sponsor for any form of racing is hard to get, and even harder to keep.

So you are probably asking yourself this right now………..”How do I get a sponsor?”. Do this, think of it as a game. If you are on the “sponsor hunt”, you are like the quarterback of the football team. You call the shots. It is sort of like picking up women. You have to………”Ask for the Order”, or date in the case of picking up women. Odds are if you ask enough women out on a date of some sort, at least one of them will go out with you. Same thing with sponsors of any kind, if you don’t ……………”Ask for the Order” (there is that line again), nobody is going to be interested. So……………. “Ask for the Order”!! That and don’t give up!!

If you go on the “sponsor hunt” odds are you will get turned down about 7 times before you get a yes. Don’t let yourself get down and depressed though, keep going! If you just got another “no”, you are that much closer to a “yes”! Be excited about what you are doing. If you are actively seeking a sponsor, you are a salesman. Sell yourself. Dress decent, Don’t be afraid to wear a suit and tie if the situation calls for it. Groom yourself well, and check yourself out in the mirror. It may sound silly, but ask yourself if you would spend money with you. If the answer to the previous question is “no”, fix whatever needs fixing! 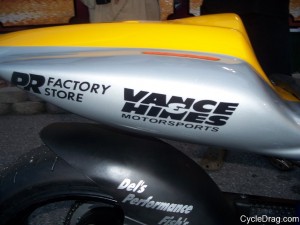 Now the amount of $$$ you ask for is up to you. It is negotiable. A sponsors name size on a race vechicle normally depends on how much a sponsor pays to put their name on something. What do you really have to offer? A company name on your bike? Maybe signage on your trailer? Forget about your “racing record”, nobody but you, and perhaps your family and friends, care about any of that. Sorry, it is just the truth. Any serious business person wants to know “why” they should sponsor you. That, and they want to know what is “in it” for them. They do not care if you were track champion someplace in Montana 18 times, they don’t care if you won a race last week. They want to know how you are going to help them make more money, period! So do yourself a favor. Figure out how you can help a company or business make more money. When you know the answer to that, and you remember that old line……….”Ask for the Order”, you are on your way to getting sponsored.

If you come up with a sponsor, stay in touch with them. The easiest way to lose a sponsor is the old “take the money and run” trick. If you are dumb enough to go that route, the checks will quit coming.