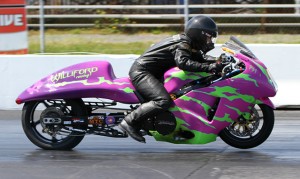 A mid-season Orient Express Pro Street rule change, giving the nitrous bikes back some of what was taken away at the start of the year, promises to give the blue bottle crowd ammunition for revenge against the 6 second turbo onslaught that happened at Maryland International Raceway in April. So expect the wildest street tire showdown of all times when the Mickey Thompson MIRock Superbike Series reconvenes for the Fast By Gast Summer Showdown at MIR on June 2-3, 2012. 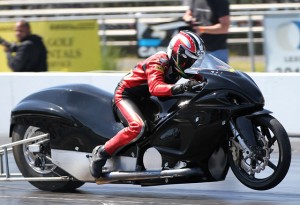 HTP Performance builder/tuner Cecil Towner is covering his bets, though, and debuting his new turbo bike at MIR with rider Lavar “Lil’ Charlie” DeLee in the saddle along with Schnitz on the nitrous ‘Busa.

Pro Street isn’t the only class expecting a vengeful pack of nitrous bikes. RS Motorsports owner/tuner Roger Starrette and his three nitrous Kawasaki ZX14s will be ganging up for sure on Johnny “Turbo” Dobrin’s turbo ‘Busa in DME Real Street. Dobrin’s won both races this year, and multi-time Real Street champ (and Adams Performance/RS Motorsports rider) Jeremy Teasley is pissed at seeing his checks and trophies going to someone else. 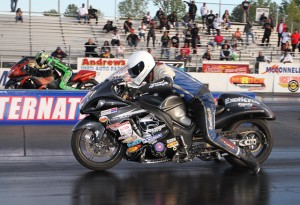