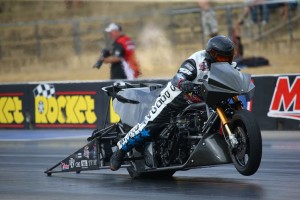 In an eventful round of the A.N.D.R.A. Championship, Matheson, along with most of the field of 10 Top Fuel dragbikes struggled with the cool windy track conditions during qualifying on Saturday.

Qualifying was shortened to two runs with a condensed program, due to rain. Matheson’s first qualifier saw a three stab attempt to hook up, as the clutch settings were too aggressive for the track.

The field was advised by the officials that they only had one more qualifier, so the intensity rose dramatically, as the temperature of the track continued to fall.

Matheson said his new clutch combo was proving tricky and they still hadn’t found the right balance, “We backed it all down to ensure we got into the field, so we could race the following day. ”

As the second qualifier came around, the conditions were better, but not ideal for the 1500 horsepower motorcycle.

Matheson said he had to get down the track regardless of the conditions, “We all have the same track”, it’s who is the smartest in the set up to post the quickest time”. 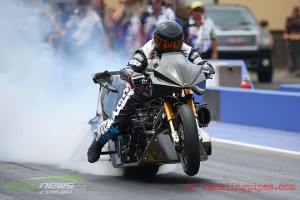 In the second qualifier Matheson lined up against local Sydney based rider Leonard Azzopardi. Matheson hole shot Azzopardi, but Azzopardi passed Matheson as he shut off the re-gather his machine. With Azzopardi blasting past early in the run, it fueled Matheson on his Nitro Voodoo machine and he quickly peddled the bike, running down Azzopardi before the 1000ft mark, posting a soft 6.5 at just under 200 mph.

This was quick enough to give Matheson Top Qualifier and was a get out of jail to eliminations for the following day.

Unfortunately, leading up to Matheson’s Top Qualifying pass Matheson saw fellow Top Fuel competitor, Rob Cassar get out of shape at the finish line, crashing heavily as he tumbled down the track at high speed, Matheson said it bought back some bad memories of when he crashed a year earlier at over 370 kph.

Matheson’s Nitro Voodoo Team tried for another combination to be more aggressive on the launch as the track conditions looked to be coming around, as the day unfolded.
Come Race Day Matheson was up first, with WA based Nitro Harley rider Gordon Crawford. Matheson had lane choice, as Top Qualifier and was keen to win the elimination. Unfortunately for him he was too keen, leaving the tree early and red lighting.
Matheson ran a 6.281, shutting off early, with a solid straight pass, but was out with a red light.

Matheson was philosophical after the race, saying, “it had to happen, my first red light since I began racing and I hope my last! I let all the Team and fans down, but that’s history now.
Despite the loss, we chalked up our 14th from 20 Top Qualifying runs, which was good news.
We are hoping to get more data, so we can be on top of it for the Winternationals in June, however, we will resume our process at the Winters Warm Up meeting at Ipswich in a few weeks.”

Congratulations to Leonard Azzopardi and his Team winning with a 6.59 over Gordon Crawford with a 9.22, well done. See you at the Winters.