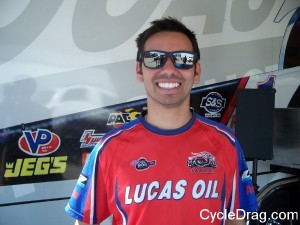 Arana Jr. extended his points lead with his fifth career victory by beating Eddie Krawiec, Scotty Pollacheck, and Jim Underdahl in a stirring final round.

“I have a feeling it’s going to be one of those years,” Arana Jr. said. “Everything so far has fallen into place for me. The bike’s running very consistent, very well. We’ve got this thing dialed in and we don’t have to do much. We’re cooling it off and double-checking everything, but as far as the tune-up goes we’re not changing much. This Lucas Oil bike is bad to the bone.”

Arana Jr., one of the best in the class on the starting line, left behind the other three riders in the final despite a .028-second reaction time. Pollacheck had a perfect. 000 light, Underdahl was .011, and Krawiec recorded a .024. Arana Jr. nosed ahead at 660 feet and edged Krawiec and the others at the finish line.

In first taste of four-wide racing, Arana Jr. opened the day with a 6.861 at 192.38 mph that led Krawiec into the next round and eliminated younger brother Adam Arana and Andrew Hines. In the second round, Arana Jr. and Krawiec advanced again, with Arana Jr. running a 6.855 at 194.16 mph to bounce John Hall and Katie Sullivan.

“It was crazy,” Arana Jr. said. “There were a couple of guys I had to beat more than once. I had to race Eddie Krawiec all day. All three rounds I ran him and I beat him all three times.”

The start to the season was especially sweet for Arana Jr. and his team because the Harley-Davidson team of Krawiec and Hines won all but one race in 2012.

“We’re showing them that we’ve had this all along,” Arana Jr. said. “Now that the playing field is even, it’s our time to shine. It’s not just those guys, though. The whole Pro Stock Motorcycle class has stepped up. Everybody’s going fast, Suzukis, Buells. It’s going to be stiff competition.”

So far Arana Jr. has been up to the task.